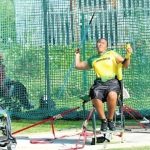 FORMER national female cricketer Toni Greaves says she never lost hope of walking again after a gunman shot her in the back, leaving her with a spinal cord injury in late 2007.

So, when tests done on the 26-year-old paralympian in London this summer showed that there was still some “correspondence” between her legs and her brain, she was elated.

“I have never stopped dreaming that I will walk again and be able to resume my normal life,” Greaves told the Sunday Observer last week. “The results of the tests have given me renewed hope.”

Greaves, who was a member of the Jamaican delegation to the Paralympic Games in London in August, was one of a number of athletes with spinal cord injuries who underwent several tests, including a check of the level of stress on their heart during competition.

She said all the results came back positive. “Everything was OK, the tests showed that all my organs worked well,” she reported.

Most pleasing to her, however, was that tests on the nerves showed there was correspondence between her arms and brain, and her legs and brain. “I still have a lot of sensation in my legs and I can feel tingling and even cramps at times,” she said.

Now, Greaves wants to travel to Cuba for treatment. “I have done my own research, and based on the experience of one of my friends, I believe if I am able to go there I will be able to walk again,” she told the Sunday Observer.

The cost, though, is proving a problem for Greaves, who is unemployed. According to the wheelchair-bound athlete, it would cost about $3 million to fund the entire trip. That would include airfare, accommodation for herself and one family member, and treatment.

Greaves is hoping that the fact that she has represented Jamaica in sport will encourage someone to assist.

“The Ministry of Sports and any agencies out there that can help; I have represented the country in sports since I was 14 years old and even since my accident I have still found ways to represent the country,” she said.

At the time of her misfortune, Greaves owned her own business and was working toward being financially independent in order to take better care of her family.

Since then, she has become close friends with another young woman, a University of Technology student, who was also shot and suffered spinal cord injuries around the same time and who has been to Cuba to seek treatment.

According to Greaves, the trip was not successful as her friend was not able to stay there long enough to get the full treatment.

Among the treatments she said that are available, as far as she knows, include nerve transfer and electrical shocks.

Dr Rory Dixon, who was the Jamaican team physician at the Paralympic Games, has, however, urged caution.

In an interview with Sunday Observer, Dr Dixon said “it is not unusual for patients with spinal cord injuries to feel some sensation in their legs; this is normal, but this does not necessarily mean that there can be full recovery”.

However, hope still flows through the veins of the former St Elizabeth Technical High School (STETHS) student who was a member of the national Under-21 and national senior cricket teams as an opening batter.

Greaves also played football for STETHS and represented the school in the javelin at the 2002 ISSA Girls Champs held at GC Foster.

Last July, she won the F54 javelin gold medal at the US Trials held in Indianapolis.

She was unable to represent Jamaica at this year’s Paralympic Games, due to the quota system that allowed just three athletes to take part. But despite her disappointment, Greaves is optimistic that given the chance to continue her career as a Paralympian she will be able to win medals at the international level.

Currently, she said, she has not been able to do as much physiotherapy as she would have liked, given the lack of space at Mona Rehab. However, she said she tries her best to keep fit.