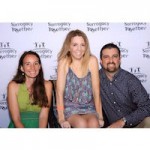 “The accident made me want kids even more.” -Rachelle Friedman

Knightdale, NC — Rachelle Friedman loves to shop. The problem is she doesn’t know if she should buy baby clothes for a boy or a girl.

“Who knows what it’s going to be? I don’t know what I’m leaning toward. There’s good in both. I’d be happy either way,” says Friedman.

Rachelle is expecting her first child with the help of a surrogate.

I’m super overwhelmed and scared like any upcoming parent but I’m more excited than anything.”

Rachelle knew she wanted to have a baby when she fell in love with her now husband, Chris Chapman. The couple met while attending East Carolina University. Even though Rachelle was left paralyzed from the neck down after a friend playfully pushed her in a pool at her bachelorette party in 2010, her plan to be a parent has never strayed.

“The accident made me want kids even more because you realize life is short and I want to do all these things before I go.”

Not even her critics can take away her enthusiasm or desire.

“Just because I can’t move my fingers doesn’t mean I can’t manipulate my hands to do things like change a diaper, to get a baby dressed. There are plenty of things I can do that people think I can’t.”

Rachelle also says she has a strong support system. Her mother lives with the couple five days a week. Chris, a science teacher, is equally excited to be a parent.

With a baby on the way, Rachelle is busy planning. The office in the house is the future nursery. Since Rachelle is choosing not to know the sex of her unborn baby, she’s going to decorate the nursery in neutral colors such as turquoise, gray and white.

While Rachelle and Chris prepare their home, their college friend who lives in Asheville is carrying their baby.

“She’s doing really well. She’s the best person for the job. She’s so healthy and active. She’s really excited to be doing this for us,” explained Friedman.

Rachelle could become pregnant herself, but doctors said her medications wouldn’t be safe for the fetus. So Rachelle wrote about her predicament and Laurel Humes, a stay-at-home mom, responded.

“She’d been following my story on Facebook and saw I needed a surrogate and she messaged me and said I would love to do this for you.”

Since the accident that left Rachelle a quadriplegic, she has found new purpose. She has become an author, a keynote speaker and a spinal cord injury ambassador. In about five months, she’ll add mother to her list.

“The anticipation is awesome. It’s going to be a totally different life and i’m excited about that!”