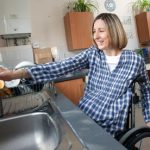 Linda Liebenberg did not expect to be in a home for older people at the age of 32. Nonetheless she spent 20 months living in one after being discharged from hospital, following treatment for a broken neck that had left her paralysed.

“No [staff] in the home had any training in spinal injury at all,” says Liebenberg, who had to give up her second-floor, rented home. Staff didn’t know, for example, how to use the hoist and sometimes wouldn’t take direction on tasks she needed help with, such as getting out of bed, washing and dressing. “I tried to explain what I needed but they didn’t always listen.”

Most of the other residents were elderly. “There wasn’t much of an opportunity to have regular conversations,” she recalls. Her tiny bedroom was unsuitable for a wheelchair and she was only allowed to shower every other day when there were enough staff to help her.

The study, called Understanding the Health and Wellbeing of Spinal Cord Injured Adults in a Care Home, is by researchers at the Peter Harrison Centre at Loughborough University. It describes how those with spinal injuries struggle to get the specialist care they need in care homes, meaning that their condition is likely to deteriorate. They are also likely to experience depression and become dependent. About 1,200 people a year have a spinal injury, about half of whom are under the age of 30. Of these 1200, 240 end up in care homes.

The study was led by Brett Smith, who has more than 15 years’ experience in the spinal injury field. He was particularly shocked at the impact living in a care home had on participants’ mental health, pointing out that none of them had asked to go into a home – they were forced to because there were no other options. “It’s not inevitable that people who break their necks or have a spinal cord injury [become depressed],” says Smith. “Most cope and over a period of time they experience a sense of growth.”

Aspire commissioned the qualitative research with a cohort of 20 people to see if it confirmed anecdotal evidence. Of those surveyed, all described themselves as depressed, 70% had severe depression including suicidal thoughts and 20% had attempted to take their own lives.

Brian Carlin, chief executive of Aspire, says: “We can’t afford to have someone who’s been through rehabilitation in circumstances that cause them physical and psychological damage.” He points out that some situations could be “life-threatening” – for example, if staff have not been trained how to move someone properly, or how to help them manage their bladder or bowels, an important health issue for people who have spinal injuries.

Wheelchair-accessible housing is in short supply in the public and private sectors, plus funding for adapting a home can be difficult to access. Disabled facilities grants (DFGs), for example, which are for building work or equipment, are means tested and applying for them is complicated and time-consuming. According to the Department for Communities and Local Government, central government cash for DFGs increased in 2011-12 from £156.9m to £200m. But because the funding is administered by local authorities, it is no longer ringfenced, and this may tempt hard-pressed councils to use the money elsewhere.

Liebenberg is clear that she only managed to move on because she is “a very positive person … I had times when I felt low and very frustrated that I wasn’t able to live my life the way I wanted to live it. It just made me more determined to get out.”

Smith says that part of the solution is to think long term and do one’s best to find suitable housing. Care homes are simply inappropriate for people with spinal injuries, he says. Better information about housing and improved hospital discharge procedures would help. But the development of more wheelchair-accessible housing is the solution.

The experts at Aspire would like to see local authorities adopt an approach similar to that of the Greater London Authority, where 10% of all newly built properties must be wheelchair accessible. In the meantime, Aspire, which has 25 houses and flats across the UK specially adapted for those with spinal injuries, is planning to open 10 more in the next six months.

After a long battle, Liebenberg is living in a wheelchair-accessible first-floor flat with a lift and an adapted bathroom and kitchen in north-west London, where she is a primary schoolteacher. She says there is a need for more properties but also that “there’s a ridiculous amount of red tape and hoops people have to jump through”. Her advice to those in a similar position? “Just keep pushing.”

• Understanding the Health and Wellbeing of Spinal Cord Injured Adults in a Care Home can be found at aspire.org.uk

University of Pittsburgh Awarded $4.75 Million Grant to Improve Treatment of...