Stronger every day: Brian Keefer of ‘Extreme Makeover’ is gaining mobility after a paralyzing accident 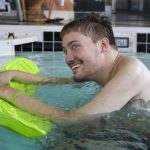 It’s been more than four years since Brian Keefer attempted a triple flip into a foam-filled pit at a Fairview Township gym and plunged head-first into the hard foundation underneath.

In that instant, he became a quadriplegic.

He thinks back to that day constantly, and to the life he led before. A life of athletics, constant motion, carefree days at the beach and few worries.

Thinking back is not depressing, though, he said. It’s motivating.

It’s what keeps him working out daily, pushing himself to strengthen his muscles and retrain the nerves damaged in his accident.

“I want to get back to how life was before,” he said this week after emerging from the HydroWorx therapy pool where exercise specialist Kelsey Harbold had been putting him through his paces. “I try to be positive. It’s a personal choice to be in a good mood or a bad mood, and I choose to be in a good mood.”

He went back to school, accompanied by his father, Steve, as his caregiver. He graduated from Lock Haven University in May with a degree in recreation management, an A- grade point average and a standing ovation when he went up on stage.

And most notably, he starred on national TV on the reality show “Extreme Makeover Home Edition.” That was after 4,000 volunteers rebuilt his family home in Newberry Twp. in one week in June 2011 to help him become as independent as possible.

The house has high-tech innovations such as a voice-activated iPad that lets him turn on the television, dim the lights and perform other tasks without the help of his family.

The highlight of the house is the therapy room. It contains an electrical stimulation bicycle, an adapted treadmill and other items that help him continue what is called “activity-based restorative therapies.”

Topping all the equipment for helping him improve is the pool installed by Middletown-based HydroWorx. Since Brian graduated in May, he has been working with Harbold in the pool three times a week, and the improvements seem remarkable.

When he started a few months ago, he could sit independently for only a few seconds on a platform in the pool before slumping over. This week, he sat for more than half an hour, even when jets of water pushed hard against his chest and the muscles in his shoulders bulged.

He could move his floating arms back and forth, touching them together in front. That is something he could not do even a few weeks ago.

Working in the pool takes away the weight of gravity, allowing him to move more freely, his dad said.

“The water multiplies the movement he has,” he said. “It is teaching the nervous system to find different pathways to the lower body.”

Right after the accident, Brian was not able to lift his head. Recently he was able to sit, unsupported.

That was an incredible feeling, Brian said.

Lately, it seems the baby steps are coming quicker, he said.

“Each hour of each day it gets better,” he said.

Brian operates his wheelchair with movements of his head. His next wheelchair should have a joystick that he can move with his hands as his movement and strength improve, said his mother, Dawn. He can now wave. Being able to move his arms and hands will help him feed himself and add another step to his independence.

Brian learned the physical therapy moves through the Kennedy Krieger Institute’s International Center for Spinal Cord Injury in Baltimore, where he goes every six months to be tested for nerve reactions and muscle strength and to receive intensive therapy. He is to visit again in December, if the insurance company agrees to pay, Dawn said.

Therapists from the center spent six weeks with the “Extreme Makeover” crew members advising them on the type of equipment likely to help Brian.

The center was founded in 2005 by John McDonald, the doctor who helped the late actor Christopher Reeve regain some movement many years after his injury in a horse-riding accident.

The institute’s website says: “For many years, experts held that most improvements from spinal cord injuries occurred in the first six months of recovery, and that improvement was impossible after two years. … The experts were wrong.”

Daniel Becker, director of the pediatric spinal cord injury unit at Kennedy Krieger, said new patients often tell him their previous doctors have told them there is nohope after six months or a year.

“We learned more than 10 years ago that is absolutely not true,” he said.

Recovery from an injury never stops as long as patients continue with aggressive rehabilitation, he said. Brian is a perfect example.

When Becker started treating him in November 2008, Brian’s body was flaccid, he said. He called the changes in his function remarkable.

“We get the question all the time about how much better a patient can expect to get,” Becker said. “Nobody can tell you what you won’t be able to do in the future.”

Brian “is far from his full potential,” he said.

“By activating the central nervous system, we can repair damaged nerves,” Becker said.

Years ago, Brian probably would have died shortly after his accident, said. Now, “He is actually in very good health,” she said.

Becker said Brian has “the perfect storm for recovery chances” because of his high degree of motivation, positive attitude, extremely dedicated family, the help of “Extreme Makeover’s” therapy room and community support.

While the television crews are long gone, many of the contractors who helped build the house return whenever anything needs to be fixed, Dawn said. Local community groups still run fund-raisers to help buy equipment for Brian.

Neighborhood grocery stores are still filled with people wearing the green wrist bands a friend of Brian’s sold for a fundraiser after his accident.

The support of family, friends, school and the community also has been vital in Brian’s recovery, the Keefers said.

In January, Brian and his family will travel to Oklahoma, where he has a five-month internship as an assistant coach for the Paralympic volleyball team. After that, he’s not sure what he will do.

But he absolutely believes he will walk again one day.

By MONICA VON DOBENECK, The Patriot-News