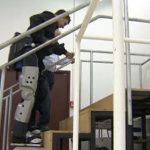 Less than a year after unveiling a pair robotic legs that let paraplegics stand and walk, New Zealand’s Rex Bionics has made its first commercial sale to a champion Paralympian who took his first steps in more than 30 years with the aid of the device.

New Zealander Dave MacCalman, who sustained a spinal cord injury diving into a shallow river, paid $150,000 for the customized exoskeleton that will have him walking up stairs, looking directly into other people’s eyes, and reaching tall shelves once he has a bit more practice maneuvering it.

“It’s just great, such a relief to be out of the chair,” says the 6-foot 4-inch athlete as he stands up using the device in this TVNZ video. When he first tried the mechanical legs, “I was fascinated by my feet moving, so I tended to watch them more than anything.”

To operate the 84-pound device (see it in action in the video below), users must have adequate body strength and functionality to transfer themselves from their wheelchair into the Robotic Exoskeleton (Rex) by holding on to Rex’s legs. They then strap themselves in and use a hand-controlled joystick and control pad to maneuver the battery-powered mobility-assist device on solid, stable surfaces such as those inside the home or workplace. (Rex is not designed for use on slippery or soft surfaces, or in areas containing debris or small objects such as ice, snow, sand, grass, mud, or gravel.)

MacCalman sustained his life-altering injury three decades ago while in California on a basketball scholarship. He then worked as a basketball coach before deciding to re-enter elite sports. Since then, he has won wheelchair events ranging from international wheelchair marathons to Paralympic and world pentathlons. He won two gold medals at the 2000 Sydney Paralympics.

He contacted Auckland-based Rex Bionics after seeing its device in the news last year and was excited to discover that he fit the criteria for using it. He can transfer himself into the exoskeleton and operate the hand controls. He fits into the chair (customers need to be between 4-foot, 8-inches and 6-foot, 4-inches tall; weigh less than 220 pounds; and have a hip girth of less than 14.9 inches). And, of course, he could afford the pricey contraption.

Rex Robotics’ Robotics Exoskeleton isn’t the only device giving new mobility to those with spinal cord injuries, however.

Others include Berkeley Bionics’ eLegs, which were built in the legacy of HULC, a robotic exoskeleton created by Berkeley Bionics and Lockheed Martin to give soldiers superhuman strength to carry loads up to 200 pounds for extended periods. eLegs are currently undergoing investigational trials and are expected to become available to rehabilitation centers by the end of the year, with a personal version of for sale for an as-yet undisclosed price in 2013.

Another robotic suit, Argo Medical Technologies’ ReWalk, is currently undergoing clinical trials in the U.S. The Israeli company says it expects to be selling ReWalk for personal use for about $83,500 by early next year.

Attitude can play significant role in recovery from paralyzing injury