Paralyzed woman takes her story ‘Beyond the Outhouse’ 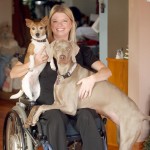 ORONOCO – As Laurie Reese tells the story of how she broke her back, the natural instinct is to wait for the punchline.

It’s not the punchline, though; it’s the reason she’s paralyzed from the waist down.

And now, it’s the title of the book she’s written, a book that’s helped in her healing process, Reese said.

She’ll be signing copies of “Spinal Cord Injury: My Life Beyond the Outhouse” from 1-3 p.m. Saturday at Christian Book and Gift Shop in Rochester.

Always an avid gardener, Reese decided in 2007 that the old outhouse on their property near Oronoco would be the perfect thing for her tools.

“We’d sided it. It didn’t have the facility inside or anything, so my husband and I were just moving it from the back of the house to the side, near my garden,” she said, using a skid loader.

“He couldn’t see where he was going, because it was so tall,” Reese said, “so I was sort of guiding him.”

“I remember putting my hands up against it to stop it, but I don’t remember turning around to run” or the impact,” Reese said.

“I remember my husband yelling at me to get out from underneath it, because he was trying to lift it,” she said, “and I told him, ‘I can’t. My back’s broken.’ I have no idea why I would’ve even said that.”

It turns out, she was right, though Reese was able to “army-crawl out from under it, grabbing grass, and managed to turn myself over.”

Doctors performed surgery, waited for the swelling to subside, then came to Reese in the intensive care unit.

“They said I had a 3 percent chance of walking again,” she said.

Her thoracic vertebrae 10-12 — just below the middle of her back — were broken. Reese was paralyzed from the belly-button down.

Her outlook in the ICU, she said, was one of denial.

“I thought, I’ll do what I’ve got to do, and everything will get back to normal,” Reese said. “It was harder for everyone else around me. I don’t think I even cried at all.”

When she was moved to the rehabilitation unit, though, things changed.
“I thought, this is real,” she said. “The shock wore off and reality set in. I cried a lot, then.”

Coming home from rehab was hard, too.

“I’d gotten pretty used to the routine at the clinic,” Reese said. “There were people to help me; there’s always someone around. They have you spend one night at home the weekend before you come home to see what needs to be done” to make the transition smooth.

“It’s really hard coming home and seeing the pictures on the walls, what I should be doing, and not being able to do it,” she admitted.

Her family, husband Pete and the couple’s three daughters — had adjusting of their own to do, Reese said.

“We remodeled the kitchen and put an addition on,” she said, as well as added a covered, concrete ramp to afford her access to the house. She uses a power-assist wheelchair.

“It’s a lot easier, but I still get frustrated,” Reese said.

Part of her recovery has included talking to patients with similar injuries, something she’s been asked to do four or five times.

“The first time, it seemed really weird,” she said. “I’m not going to beat around the bush; if they ask me a question I’m not going to lie to them. I tell them, ‘you’d better want to hear the real answer.’ They seem so much more accepting.”

The first two years of recovery are the most critical, she was told, and patients are encouraged to journal their feelings.

“I had written some stuff down as time went by,” Reese said. “I don’t know how it went to writing a book; it just kind of started, and all of a sudden I had 15,000 words. It was helpful to me, because then I talked about it more, and I could help people understand” the reality of spinal cord injuries.

She worked on the book off and on for four years, occasionally running off copies of what she’d written to share with others.

“I never thought it would actually go this far, that people would read it,” Reese said. She hesitated to order even 50 copies of the first printing, “because I didn’t want to sit here with 30 on my hands.”

All 50 copies were sent to her hometown in South Dakota, where friends and family were asking for them. Since July, another 350 have been printed.

“One of the doctors I work with on my floor bought 25 of them and gave them out to the technicians on the floor,” said Reese, a medical secretary at Mayo Clinic. “It’s gone a lot further than I expected.”

Her father, though, still can’t read the book, nor can two of her daughters.

“Some days, it’s really hard,” Reese admitted, “but I just try and go on and hope that eventually they’ll come up with something (for spinal cord injuries) or I’ll get the e-legs.”

E-legs, or Ekso Legs, is an artificially intelligent exoskeleton — worn outside the clothing, secured by Velcro-straps and clips — that helps paraplegics to walk. Formerly used exclusively by the military, the device is now being offered to other patients.

“I think if they do a study, my chances are really good at getting in,” Reese said.
She still works full-time, gardens with raised flower beds and unique landscaping and still drives a pickup.

“You can still get out there and do what you want. I always drove a pickup, and I eventually found a company that did lifts for pickups.

“I was told once that I’m lucky to be alive,” she said. “I have pictures (of the scene) in the book; I look at them and think, how did I not get crushed?”

Facebook
Twitter
Email
Mix
Digg
Previous articleCatastrophic health insurance: can you pay the price?
Next articleParalyzed but Determined to Walk, and to Help Others Too