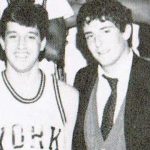 Alan Brown had just wrapped up a fundraiser for his high school best friend, Danny Heumann, who had been paralyzed after he broke his back in a car accident.

“We were 18 years old, ready to live life,” said Brown, who became his friend’s caregiver, staying by his side at New York City’s Rusk Institute after the 1985 accident.

But just six weeks after he had helped raise $25,000 for his friend’s new foundation, Brown himself suffered a cruel twist of fate. He, too, was paralyzed after diving into the surf on a Club Med vacation in Martinique. It was Jan. 2, 1988, a bit more than two years after Heumann’s accident.

Brown said that he quite literally “saw the light” when he shattered his neck. The undertow threw him head-first against the ocean floor.

“I heard it snap,” he said. “I was under water two or three minutes holding my breath to survive. But I thought this was it.”

He never lost consciousness and remembered from his friend’s accident not to be jostled, so he refused a ride in the bumpy ambulance until he could be airlifted to the hospital. En route, he said he quoted lines from the comedy film, “Fletch” — “It’s all ball bearings.”

Just short of his 21st birthday, he lost the use of his legs, but not his sense of humor or his drive.

Today, at 45, Brown says he is doing what he has always done best: facing a challenge.

He has pledged to raise $250,000 — $10,000 for each year he has been paralyzed — for the Christopher and Dana Reeve Foundation. His one-year campaign is aptly named the “Power of We.”

“There’s no ego here — we’re building an army,” said Brown, who is director of public impact for the Reeve Foundation. “Spinal cord injuries don’t discriminate. In one split second my life changed.”

Heumann now sits on the board of the Reeve Foundation.

An estimated 5.6 million Americans live with some form of paralysis, according to Centers for Disease Control and Prevention, and most, like Brown, were injured when they were young.

The Reeve Foundation has become the “hub” of most of the research and advocacy for those who suffer from paralysis. It is named for the actor Christopher Reeve, who was injured in a horseback riding accident and died in 2004. His wife, Dana, worked with him and chaired the foundation; she died in 2006.

Spinal cord research is “painstakingly slow and expensive,” according to Susan Howley, executive vice-president of research at the Reeve Foundation. And there are never any quick fixes.

But this is a pivotal time in research and more is being done to improve quality of life and independence for those who are paralyzed.

“It’s actually a phenomenally interesting and exciting time in the field of spinal cord research,” said Howley. “The old dogmas haven’t really been overturned for a very long time.”

As recently as two decades ago, an injured adult was never expected to recover. Today, scientists are discovering activity-based exercise or locomotor training that can “remind” the spinal cord how to step and stand again, she said.

But being wheelchair-bound is only part of the medical, psychological and financial challenge of a spinal cord injury.

Depending on the severity of the injury, the yearly expense for treatment can be anywhere from $300,000 to nearly $1 million, according to The University of Alabama National Spinal Cord Injury Statistical Center and the Centers for Disease Control and Prevention.

Alan T. Brown hopes to raise $250,000 for the Christopher and Dana Reeve Foundation.

The secondary effects of spinal cord injuries are as challenging as the mobility issues: constant pain, bowel and bladder issues, and skin problems; shoulder and back injuries from years of strain and aging in a wheelchair.

“There are so many of them,” said Brown. “Care giving and the psychological are part of it — developing your own confidence to face the world. Some people don’t even want to leave their homes.”

Brown’s generation is the first to even survive spinal cord injuries. “There is no road map for us,” he said. “In the past, if they didn’t die, they were put away in a nursing home to die.”

Relationships are tested; Brown said his own marriage broke up.

Since the early days of treatment at Jackson Memorial in Miami and later in outpatient therapy at Mt. Sinai Hospital in New York City, his humor has kept him going.

“They put me in a halo backwards and had to unscrew it and screw it back into my head,” said Brown. “I laughed the entire time. I laughed every day and cried every day.”

He said he learned to hold his breath so the nurses would talk to him.

Laughter has carried him through six surgeries and physical ordeals. “I am an emergency room frequent flyer,” Brown jokes.

He has 11 screws and two metal plates that were inserted after his neck was rebuilt.

“Technically I’m three people,” said Brown. “My head is screwed on, my body is in the middle and there is my soul.”

Brown has always been a giver — as a child growing up in a Jewish family in New York City, he used to help prepare dead bodies for burial — “one of the biggest mitzvahs,” he said.

“I was always a person who wanted to overcome, an overachiever,” he said. “I wasn’t a great student, but I was there by your side. I would help the elderly at Rosh Hashanah — it’s in my make-up.”

While he was still bedridden and his health was touch and go, Brown asked his rabbi what he would say in a eulogy. The rabbi told Brown he had the “spirit to help others.”

Brown uses a power wheelchair and has difficulty using his hands. He said he battles constant pain, but is able to get himself in and out of the chair and drives a car.

A former hockey player, Brown keeps fit. He participates in marathons in his wheelchair and has tried both scuba and sky diving.

Professionally, Brown has worked his entire life — at public relations, recruiting NFL players for ad campaigns and even running a radio station.

“Nothing will ever stop me,” said Brown, who has also begun a book.

He confesses he doesn’t sleep much, especially with an eye to the fundraising campaign for the Reeve Foundation.

“There totally is hope,” he said when talking about medical advances. “Cures come in different shapes and sizes. A lot of us would take just not being in pain.”

“Alan lives with his injury day in and day out,” said Howley at the Reeve Foundation. “He, better than anyone else, understands what the challenges and needs are. He is so articulate and compassionate. We are very lucky. God bless him.”

For more information and to help, go to the donor page for the Alan T. Brown Power of We Campaign.

Hospital organizes team for those with spinal cord injuries