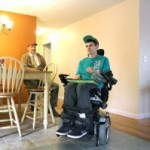 If you come across a photo of David Hudgik, most likely he’s smiling. It reflects his optimism 16 months after being paralyzed in a trampoline accident at his home in Keene.

Life moves forward for the 17-year-old Keene High School senior and his family, even when they’re tempted to shake their fists at fate. But that won’t do. Boxes in their new house in Keene need to be unpacked. The interior of the new elevator needs staining. There’s a hockey puck to drop today.

The eight-point New Year’s resolution list Hudgik crafted with his father, Paul, is about moving forward, not looking back. No. 1 on the list: “GET ON SNOW ASAP.” The list also features getting more physical therapy; getting the family van converted so he can drive it; moving into the newly renovated house; finishing work on the house; getting a manual wheelchair; planning and putting together more fundraisers to support the above goals.

This afternoon David Hudgik will drop the ceremonial first puck at Crotched Mountain’s annual Boston Bruins Alumni Classic game at Sullivan Arena on the campus of St. Anselm College. The game, which starts at 2 p.m., pits a collection of Bruins legends against the Crotched Mountain Wild, which has local players from Keene to Antrim.

Rick Middleton is one of the leaders of the Bruins’ alumni team; others who play regularly for the team include Terry O’Reilly, Reggie Lemelin and Cleon Daskalakis.

Hudgik is honorary captain of the Wild team and will be presented with a team jersey. The game benefits the Crotched Mountain Accessible Recreation and Sports program, which offers skiing, snowboarding, kayaking, canoeing, cycling and hiking lessons to children and adults with disabilities. Last year Isabelle Tenters of Jaffrey was honorary captain.

Of course, when it comes to winter sports, Hudgik prefers snow over ice. He is an avid skier, having competed in freestyle skiing at Granite Gorge, where he was champion in his age division. Jumping was in his genes.

He says he dreams of skiing almost every night. “It’s funny, in my dreams I keep progressing to bigger jumps — and I’m improving,” he says with a laugh.

The accident happened on Sept. 9, 2011, a Friday evening, when he was on his trampoline in his backyard. Hudgik and his friends were doing forward rolls, jumps they had executed hundreds of times.

Hudgik landed awkwardly on the trampoline and broke his C4 and C5 vertebrae. It left him with limited movement in his left shoulder and no feeling on his right side or below the waist. He has since regained some use of his arms.

“It was really weird. I tried to move my arms and I couldn’t. It felt like I was still in my tuck,” he said.

Physical therapy took him to the Shepherd Center in Atlanta for three months, one of the leading spinal cord rehabilitation facilities in the country, where he also developed several friendships.

Now he’s back at Keene High, though behind in his classwork because he missed most of last year. He was back on skis through Crotched Mountain’s adaptive ski program last winter, but so far has been too busy to hit the slopes. He hopes to go skiing later this month, and several ski areas — from the Green Mountains of Vermont to the White Mountains of New Hampshire — have contacted him about their programs.

Meanwhile, an exhausting process of finding, buying and moving into a new house ended last weekend, when the family moved into a renovated house on the outskirts of Keene. The family’s old house on Washington Street couldn’t be converted to be handicap-accessible, so a months-long search ensued.

“It was very frustrating,” Paul Hudgik said. “We looked at so many places that just wouldn’t work. Our Realtor (Shamrock Real Estate) kept saying, ‘Don’t give up, when it’s right, it’s right and you’ll know it.’”

They finally found a house in foreclosure that they bought in May, and have been working on it ever since. Architect Mike Petrovich, a family friend, was instrumental in the design, even installing an elevator; contractor David Williams consulted with the family over the tiniest details; and Stebbins Spectacular Painting brought it to life.

“I can’t begin to thank people for the help they’ve given us,” Paul Hudgik said. “They all kind of pulled through and said it’s a great project. I don’t know what we would have done otherwise.”

David Hudgik says he’s not sure what his future holds, but hopes the ski industry is a part of it. He is shadowing employees at Granite Gorge as part of a school project and has taken a liking to math and science. Just where that will lead is too early to tell.

Today, it’s about dropping a hockey puck and getting some Bruins’ autographs. No doubt he’ll be smiling.