Allogeneic and autogolous stem cell therapy combined with physical rehabilitation: A case report on a chronically injured man with quadriplegia 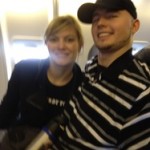 This is a research paper written by Rebecca Johnston, Daniel Leonard’s sister. She recently graduated from a Physical Therapy degree program, and wrote her Capstone paper about Daniel’s stem cell therapy treatment in Panama.

Daniel is presented anonymously in the paper, but Rebecca and Daniel have given their permission for this paper to be shared. Daniel’s ASIA scores (pre and post treatment) are in the appendix of this paper.

Background and Purpose: Stem cell therapy for SCI is a potentially promising treatment with increasing interest. This case report describes the use of a particular stem cell therapy protocol for a patient with chronic spinal cord injury, and describes his subsequent therapy and outcomes.

Case Description: The patient is a 29-year-old male who is chronically injured from a cervical spinal injury, resulting in quadriplegia. The patient was treated with a combined protocol of intrathecal (IT) and intravaneous (IV) allogeneic MSC and CD34+ cells and IT autologous BMMC at 6 ½ years post-injury. The results track the patient’s physical therapy progress until 6 months following stem cell treatment.

Outcomes: Recovery of strength in upper extremity and lower extremity muscle groups was noted, along with a functional increase in grip strength, ability to ambulate with assistance, and a significant decrease in daily medications.

“After the patient underwent the stem cell treatment and returned to outpatient physical therapy in his hometown clinic in the United States, his MMT scores were tested over the period of 5 months post-stem cell treatment…. The patient did not decrease in strength in any of the muscles tested, and experienced improvements in 6/13 upper extremity muscle groups, and 8/9 lower extremity muscle groups.”

“The patient was also able to ambulate for the first time in 5 years at approximately 4 months after finishing his treatment. He was able to ambulate in partial weight bearing with the harness and max assist of two for 40 yards at .5 MPH.”

The original post on Daniel Leonard’s blog can be found here.

Autonomic Dysreflexia: What You Need to Know