Paralyzed Artist Creates Works That Reflect Shooting That Injured Her 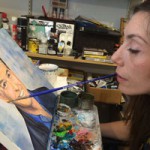 LINCOLN PARK — Mariam Paré paints by loosely holding her paintbrush between her molars.

Paré is paralyzed, the victim of random gun violence that left her unable to walk, and with limited use of her hands.

It’s been 18 years since a bullet lodged in her spine while on a visit to Virginia; she still does not know who shot the bullet that nearly ended her lifelong goal to be an artist. The 38-year-old says it took about eight years after she was shot to get back to the point where her art was before the shooting.

Now, she’s ready to showcase the first works that she has made that reflect on her injury and her experience with gun violence.

“It takes a long time to feel safe and confident to express yourself about these things,” Paré said. “I couldn’t have done this at the beginning of my injury. It would have been too fresh, too painful.”

Paré’s work will be showcased as part of a special exhibit titled “Unbroke: Art After Injury,” which features the works of four artists with spinal cord injuries at the Next Door Cafe in Lincoln Park, with an opening event scheduled for Friday night.

Her three paintings on display each dive deep into the tragic night in 1996 when, while driving with a friend she was visiting, a stray bullet struck the vehicle.

She was 20 years old at the time of the still unsolved crime.

Questions that have lingered in Pare’s head ever since she was shot are represented in her newest works.

“[The show] started making me think about what had happened to me,” she said. “I never really got to voice some of the things.”

The first piece depicts the trajectory of the bullet that struck her, landing into the back of a skeleton. The second pictures the statue of liberty holding a gun.

The third, titled “No Nombre,” reflects that she will likely never know the name of the person who shot her.

Paré, who lives in Naperville and makes her living as an artist, said the opportunity to address these lingering questions on canvas has been a cathartic experience.

The show is being hosted at Next Door Chicago, 659 W. Diversey Pkwy. with the opening event Friday from 7 p.m. to 9 p.m.

These artists are truly professionals.

“A lot of times art is used in the disability world more as therapeutic — and that’s great: it serves a really great purpose,” said Reveca Torres, co-founder of BACKBONES, a nonprofit that seeks to connect people with spinal cord injuries through one-on-one relationships and group events.

But Paré and the other contributors to the exhibit “are up a notch,” Torres said.

Ng’ang’a, who shipped a number of works to Chicago to participate in the show, suffered a spinal cord injury while diving in 1992. He is a full-time artist who paints for a living and has earned enough money to build an accessible home. His acrylic paintings depict wildlife and scenes of Africa.

Kostanski used painting as a creative release following a car accident in 2003 that paralyzed her. Her work consists of abstracts using acrylic.

Barnes was paralyzed in a hit and run accident three years ago but refuses to give up her love of painting. She was a painting and drawing major at California College of the Arts in San Francisco when she was struck crossing the street. Her goal is to land a job with a company like Pixar or Dreamworks after completing a degree in Digital Art.

“They are professional. I want to highlight that and show people that their injuries have not stopped them from being creative and doing the things that they want to do,” Torres said.

The show is the first of its kind organized by BACKBONES, which Torres founded five years ago. She suffered a spinal cord injury at the age of 13 and struggled to find friends in a similar situation until she reached college.

“People have a hard time sometimes coming to terms that they are now a person with a disability and they don’t want to accept that in the beginning,” Torres said.

BACKBONES puts them in touch with peers who can help them transition into their new lives as well as hosts events that are alternatives to the traditional support groups. Activities range from scavenger hunts to wine tastings to fashion shows with models in wheelchairs.

“Unbroken: Art After Injury” will run from Sept. 5 through Oct. 30 with most of the works available for purchase.

Mariam Pare’s artwork is available for sale at www.mariampare.com.