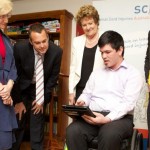 Spinal patients at the Prince of Wales Hospital in Sydney are using modified iPads to help them browse the Web and connect with family and friends.

The specially configured iPads have been modified for the needs of patients with paraplegia and tetraplegia, who often spend around six to nine months in hospital undergoing rehabilitation after an accident.

The iPads were first trialled by three patients at the hospital, with another six iPads deployed later as part of the trial.

During the trial, Chris Nicholls, education officer at the ConnectAbility program which helped to deploy the iPads, said the tablets were incredibly easy for patients to use with limited hand function.

“… obviously you can use your knuckle or whatever part of your finger or hand. The other thing [that came out of the trial] was it didn’t seem to matter what age people were, they seemed to be able to grasp how to use it,” he said.

iPads were also more manageable than a laptop for patients with spinal injury to handle and can be used to video chat and send photos to people, whereas cameras may be too small to hold.

“A lot of our clients are not on permanent bed rest, but certainly for six months or so they … have to lie on their side due to pressure areas and they physically can’t lift or manage a laptop,” Nicholls said.

The iPads were individually configured to suit patient needs. For example, a flip folio stand with ridges can help to minimise it slipping. Custom-made mounting devices can also be attached to wheelchairs.

iPads were also modified to include a speech to text function.

“We’ve also sourced a company in America that produces mouse sticks for those that have no upper limb function at all. They have conductive material on the end of the mouse stick,” Nicholls said. “There’s also conductive gloves that we have available that we sourced.”

Nicholls said while the amount of work that went into modifying the iPads was minimal, the custom-made frame mount did pose challenges.

“It’s different for every person and there’s not much commercially available mounting equipment. [However], I’d say Apple is very good now their new iOS version has accessibility for physical disability, not just for visual and hearing impaired [individuals],” he said.

Setting up a secure Wi-Fi network was also an integral part of the process and was installed by ASG Group pro bono.

Due to the hospital network being highly secure, particularly from a censorship point-of-view, a network was needed which did not censor certain keywords.

“A lot of the guys need to talk about medical issues like fertility, sexuality – all that kind of stuff. Of course, if you put any of those words [on a hospital network], most locked down systems will reject them. We didn’t want that to be the case with us,” Nicholls said.

“We’re using mini Macs as the server and we’ve [got] wireless SS points all over the place to use a localised Wi-Fi network … We’re in phase three and getting an intranet.”

Up to 20 iPads will be given to patients at the Prince of Wales hospital over the next six to 12 months. The modified iPads are also expected to be rolled out to other hospitals around Australia.

ASG Group has funded the iPads through its ConnectAbility program, which offers tangible donations, as opposed to monetary donations.

“This program has allowed our employees to use their professional skills, knowledge and expertise in delivering IT solutions to improve the quality of life for people adapting to living with a spinal injury,” Dean Langenbach, chief operating officer at ASG Group, said in a statement.