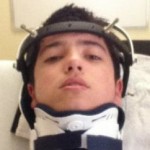 TORONTO — Randy Kells says he was fired like a torpedo head-first into the hockey rink boards, shattering his spine and severing his spinal cord.

“It was life-altering,” the 54-year-old Kells said of the accident which occurred in November 1988.

Then 29 years old, Kells jumped to avoid a collision between players. When he landed, his skate hit a rut and he skidded along the ice for 10 feet, colliding with the boards.

He would spend the next year rehabilitating from his injuries, the next three years adjusting to his new life in a wheelchair.

So Kells was horrified when he heard about the injury of Toronto teen Justin Mendes last week.

Mendes, a 16-year-old Ted Reeve Thunder defenceman, was checked from behind into the boards during a game. The illegal hit broke his neck and left him with four screws implanted in his head to hold a halo traction device in place.

For Kells, even watching hockey these days is hard because of the speed, intensity and violence of the game, he said.

“When I hear about this gentleman getting checked into the boards, it just gives me a gross feeling. I just get this quiver up my back,” he said.

The hit also once again raises the question of how minor hockey leagues should deal with catastrophic injuries and the rules aimed at preventing them. Paul Carson, of Hockey Canada, the body that governs minor hockey across the country, called the incident involving Mendes “very unfortunate” but said these types of serious spinal injuries have been on the decline for over a decade.

Carson acknowledged that this incident will raise the issue of the place of body-checking in the game, even though hits from behind are illegal throughout minor hockey. The Greater Toronto Hockey League is currently surveying its 38,000 players on how they feel about safety issues in the game, including body-checking.

Carson said preventing the injuries must be done with a mix of education and punishments for offenders that demonstrate the seriousness of the issue.

University of Toronto epidemiologist Alison Macpherson, who has done work on violence in hockey, says body-checking doesn’t need to be in the game for the vast majority of young players lacing up their skates, she said.

“Most of the kids playing youth hockey in Canada are not going to make it to the NHL,” Macpherson said. “We have to remember that and remember that we need to not treat all of the children as if they’re mini NHL players. There is a different level of hockey played at the professional level.”

Bill Adair, CEO of Spinal Cord Injury Ontario, said people at hockey’s highest levels are far too tolerant of the culture of violence that surrounds the game.

“Not only are people at risk of a spinal cord injury but people are at risk of brain injuries,” Adair said. “It’s very distressing to see hockey players drop their gloves and pound each others afterwards, as Sidney Crosby did … they’re dealing with a lifetime of damage.”

“My everyday life is not ‘legendary’, any more than yours is”...