Control a computer with your tongue 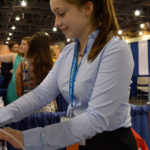 PHOENIX, Ariz. — A new tongue-controlled computer mouse would allow someone with no working arms or legs to use a computer. With such a device, people with even severe physical handicaps might navigate cyberspace. The new mouse system was unveiled last week by its designer, a Canadian teen.

More than 250,000 Americans alone have spinal cord injuries, according to experts at the University of Alabama in Birmingham. Some 118,000 of these people are quadriplegic (Quah-drah-PLEE-jik), meaning both of their arms and legs are paralyzed. For these individuals, using a computer poses a big challenge. Some researchers have invented ways for such people to control a computer using brain waves or the movements of their eyes. But now, Emma Mogus has come up with an easier way for many such patients to control a computer: using their tongue.

Emma, 17, is a 12th grader at White Oaks Secondary School in Oakville, Canada. She showcased her invention here, on May 12, at the Intel International Science and Engineering Fair. Created by Society for Science & the Public and sponsored by Intel, this year’s competition brought together more than 1,750 students from 75 countries. (SSP also publishes Science News for Students.)

Emma built a prototype of her device using simple parts. The main part is a mouth guard, like those used by football players or other athletes. Emma drilled five holes in the mouth guard that a tongue could reach: two on the left side, two on the right, and one in the front. She installed a pressure-sensitive switch in each hole. Four of the switches correspond to the up, down, left and right arrows on a computer keyboard. The fifth switch acts like the “click” button on a computer mouse. Together, all of these parts cost less than $10.

Emma’s current prototype transmits a signal to a computer through a cable. But future versions could be designed to send those signals wirelessly, she notes.

In tests, volunteers were able to quickly learn how to use Emma’s device. After just a session or two, they were navigating onscreen more quickly and typing more words per minute than when they started.

Emma suspects that her invention could be useful for far more people than just those with spinal-cord injuries. People with multiple sclerosis or other paralyzing conditions, might use the device too.

Sweating on a hard sell