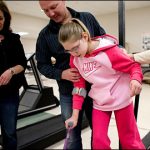 Disillusioned by U.S. doctors who could not help their daughter with cerebral palsy, Kara Anderson’s parents did something they could not have imagined a few years ago: They took her to China.

Specialists in the Chicago area, where the family lives, said that Kara’s brain injury was permanent and that the 9-year-old would probably end up in a wheelchair because of severe twisting in her leg muscles. But then her parents heard stories about children who had improved after receiving injections of stem cells.

The treatment was not available in the United States. It was only commercially available abroad.

That’s how the Andersons joined the desperate people who are taking leaps of faith in seeking stem cell treatments in places as far away as China, India, Russia and Brazil.

Western scientists worry that patients are being taken in by slick marketing campaigns, wasting time, money and hope on unproven therapies, and perhaps even putting themselves in danger.

“Unregulated therapy in the absence of any evidence that these cells are going to help patients is reckless. The potential to do harm is enormous,” said Arnold Kreigstein, a neurologist who is director of stem cell research at the University of California at San Francisco.

Scientists hope various kinds of stem cells can eventually be used to treat devastating and common ailments: heart attack, stroke, Parkinson’s disease, diabetes, liver failure, even blindness. For now, there is scant evidence for the benefits of treatments such as the ones the Andersons sought.

Most of the stem cells used in Chinese clinics are obtained from fetuses from miscarriages. They thus fall somewhere between embryonic stem cells, which come from early-stage embryos — raising ethical and religious questions about their use — and adult stem cells, which are easier to obtain and are considered safer and less controversial.

They are widely considered to be less versatile than embryonic stem cells, which can develop into almost every kind of cell in the body, but more so than adult stem cells, which are useful only to treat the tissues or organs from which they came.

Fetal stem cells also have a downside: They can trigger immune-rejection responses or lead inadvertently to new or increased pain. They also have a tendency to clump together; one patient who sought treatments in Russia developed multiple brain tumors after undergoing experimental therapy with fetal stem cells, scientists reported in the journal PLoS Medicine.

Stem cell research is an area in which the United States faces new rivals — and ones willing to move quickly from experimental research to treatment. A January report by the National Science Board warned that the U.S. position as the world’s innovation leader is declining and China’s influence is increasing. The report said that is the result of a surge in government investment in science and technology education, infrastructure and research.

In the United States, the use of federal funding for new lines of embryonic stem cells was banned in George W. Bush’s administration. President Obama reversed that decision when he took office, but China and other countries have had a years-long head start.

Treatments using embryonic or fetal stem cells are in the experimental stage in the United States and are not approved for commercial use by the Food and Drug Administration. But they remain in a regulatory gray area in China, neither sanctioned nor banned.

The government allows 50 or so stem cell clinics to operate freely. Several Chinese health officials have expressed concern about the lack of oversight. Scholars affiliated with the government say they expect some regulations to be introduced soon.

The one trial of fetal-derived stem cells that has been started in the United States has been limited to a few patients, and none using embryonic stem cells has begun. In China, thousands have undergone treatment with embryonic, fetal, adult and cells taken from a newborn’s umbilical-cord blood, Chinese scientists say. But evidence that treatment is working is merely anecdotal.

“People flock to the words ‘stem cells’ because they rightly feel that the potential is enormous. I’m right there with them, but there’s a misalignment of progress in the scientific and medical communities with the public perception of the power of stem cells,” said Hans Keirstead of the University of California at Irvine, who specializes in research on embryonic stem cells and spinal cord injury.

Stem cell treatment in China is both a government-sponsored and a commercial enterprise, with wildly varying methodologies, facilities and prices.

Chinese doctors consider the Wu Stem Cells Medical Center, where Kara was treated, among the country’s premier facilities for central nervous system illnesses. Located across from an amusement park in Beijing and inside a traditional Chinese medicine hospital, it charges $30,000 for a five-week treatment.

Cheng Bo, deputy director of the center, said doctors there offer potential patients realistic assessments of the risks and benefits. “We tell them it’s impossible to cure patients completely,” he said. “Our goal is to improve the quality of their life or to extend their life.” Many patients — about a third are children — come from developed countries where medical treatment is in general considered superior to China’s, although they may lag behind China in stem cell research.

Kara managed the improbable after the first two of four stem cell shots in January. She began limping around on a crutch and walking up to 15 minutes on a treadmill with the support of a rail, according to her parents and doctors. She could lift pebbles with her left hand and raise it over her head, which she could never do before.

Her father, Brian Anderson, who learned about the treatment from a relative who suggested he do research on the Internet, said recently Kara has retained these abilities since her treatment in December. He said he is also noticing improvement in her eyesight. “We really weren’t sure what to expect, but she got better and better every day. It was unbelievable,” said Anderson, 41, a construction contractor, who funded the trip and treatment with money pooled from relatives, friend and their church.

Doctors said the timing of Kara’s improvement may have been coincidental: Cerebral palsy symptoms periodically get better or worse for unknown reasons, but stories such as hers disseminated on the Internet are attracting thousands of patients.

In the United States, a trial involving infusions of embryonic stem cells for patients with spinal cord injury was delayed from January until August to address safety concerns raised by the FDA. Keirstead, whose work is the basis for that trial and in 2005 made headlines for getting injured rodents to walk again, said he is eager to see the trial started.

“I was jumping for joy to see those first rats walk again, thrilled when I saw the technology progress to the clinic, overjoyed to see FDA approve it,” Keirstead said. “Now we are on the cusp of seeing this in humans, and I am dismayed and frustrated at how long it is taking because the need is so great.”

Researchers Liu Liu and Zhang Jie contributed to this report.

Doctors on the Scene Acted Quickly to Treat Everett With Cold...