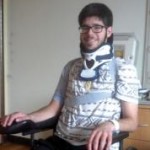 Skiers call them “bluebird days.” They’re the magical days following an overnight snowfall, full of fresh powder, bright sun and friends who are drawn to the slopes by the same irresistible lure of nature.

On February 22, Andrew Fuhrmann was having his own bluebird day at Jay Peak in Vermont, reveling in two feet of new snow until a seemingly minor ski accident left him paralyzed from the neck down.

The 23 year old Holden resident and expert skier happened to hit a small bump on the trail the wrong way and took a spill.

Fully conscious, Andrew didn’t even realize he was injured. He figured he would just be picking himself up out of the snow, but immediately realized that he couldn’t move.

“He was terrified,” his mother Geri Fuhrmann said.

His friends notified the mountain’s ski patrol who responded quickly, immobilizing Andrew and taking him on a sled down the mountain. The closest big hospital was hours away in Burlington. During the trip there, Andrew began to experience searing nerve pain in his arms and shoulders.

Doctors at Fletcher Alan Hospital diagnosed the young man with Central Cord Syndrome, a serious cervical spinal cord injury that was likely caused by hyperextending his neck during the fall.

“Doctors said it was like getting a karate chop to his neck,” Geri said.

Fortunately, Andrew had no broken vertebrae, so he didn’t need surgery. Doctors did discover that he had a cervical stenosis or narrowing of the spinal canal which made him more prone to injury.

He was stabilized for a week at Fletcher Alan, then faced his next big hurdle. He had to find a place to rehab. Central Cord Syndrome has an uncertain prognosis and Geri and her husband Chris were determined their son get the best shot at regaining at least most of the use of his arms and legs.

In Burlington, the Fuhrmanns learned about Shepherd Center in Atlanta, a nationally known rehabilitation facility for spine and brain injured patients. It’s the place where Travis Roy, a Boston University hockey player, rehabbed for six months in 1996 after a headfirst slide into the boards left him a quadriplegic.

Geri has taken a leave from her job with the state department of mental health, so she can be with her son, staying in his room to help whenever she’s needed. She’s hanging on to her sense of humor, even if the jokes are grimmer than they used to be.

“It’s just what every 23 year old guy wants,” she said of the room share. “His mother, two feet away from him.”

It’s also a jolting change from the life Andrew had been living. He was a graduate student in mechanical engineering at the University of Vermont, and last year, received his bachelor of science there. He’s very motivated and working hard to return there in the fall, Geri said.

There’s been substantial progress in the weeks since the accident, but Andrew has yet to regain complete function. He has been able to take a few steps with support and the family is celebrating each small gain.

“Most of the time, he is funny and engaging, but he has moments of terror, anger and sadness,” she said.

At Shepherd, Geri learned about the Travis Roy Foundation to assist people with spinal cord injuries.

During a literal and figurative dark hour, Geri decided to write to Roy.

“It was 2 o’clock in the morning and I wrote him a note. ‘My son is a college kid like you, just doing what he loved,’” she said.

She was stunned to hear back from Roy just eight hours later. The message came from his personal email account, he asked questions about Andrew and gave Geri his cell phone number in case the family wanted to get in touch again.

Roy was very reassuring, Geri said. He told her about how his family was so helped by the outpouring of support they got from people at the time of his injury, they were now committed to helping others.

The Travis Roy foundation paid for the cost of the air ambulance that ferried Andrew to Atlanta. He has stayed in touch and promised to visit Andrew in the future, Geri said.

Like the air ambulance, the Fuhrmanns can anticipate a slew of expenses related to Andrew’s condition that won’t be completely covered by insurance. A wheelchair, adaptive equipment, long term physical therapy, a day program, are all needs that will have to be met.

To assist the family, friends have set up an account to help defray expenses. Donations may be made in care of the Andy Fuhrmann Rehab Trust and sent to Commerce Bank, 390 Main St. Worcester MA 01608.

Study on dopamine neurons could instruct research into mobility and neurological...