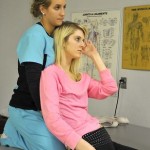 LAKE CITY – One year ago, Mackenzie Gorden was leading the life of a typical teenager.

As a high school junior, she participated in cheerleading and dance team at South Central Calhoun High School and prepared for the recital at the studio in Carroll where she took dance lessons.

Just weeks after that recital, Gorden’s life changed when she swerved to miss a deer in the road and her truck rolled down a hill off a curvy road south of Lake City.

Gorden sensed something was wrong, but she didn’t know the extent of her injuries.

“I knew something had happened, something wasn’t right,” Gorden said. “I couldn’t move my fingers to reach my phone to call for help. I tried to honk the horn to get someone’s attention.”

Almost two hours passed before she was discovered.

“I was upside down. No one could see me because the headlights on my truck were just shining into the dirt,” she said.

But she was finally rescued and taken by ambulance to Stewart Memorial Community Hospital in Lake City where family members waited. Then she was transferred to Mercy Medical Center in Des Moines.

There, Gorden learned her C5 and C6 vertebrae were broken, and she was told she would likely never walk again.

“You never would have thought she’d broken her neck,” said Gorden’s older sister, Brittanie Gorden. “She was alert and talking and she looked OK, didn’t have any bumps or bruises.”

Unwilling to accept that prognosis, and determined to get their daughter the best care, Gorden’s parents had her transferred to St. Marys Hospital in Rochester, Minn.

Gorden spent a week in intensive care there and more than six weeks in rehabilitation before being flown to Craig Hospital in Englewood, Colo. Craig Hospital is a medical center that specializes in treating spinal cord and traumatic brain injuries.

At Craig, Gorden underwent hours of daily intensive therapy. She learned to use her hands, exercised her limbs and muscles, and learned how to maneuver a wheelchair. Just two months after the accident, Gorden regained some movement in her legs.

“I felt like my knee bent,” she said. “We got that on video to send back to my dad.”

After eight weeks at Craig, Gorden returned home to Lake City in time last fall to participate in her senior year homecoming festivities, where she was crowned homecoming queen and she cheered with the cheer squad.

“She was so determined to get home for homecoming,” Brittanie Gorden said.

Since then, it’s been the little milestones that have meant the most to Gorden and her family.

At Stewart Memorial, where she undergoes physical therapy at least twice a week, she is learning to stand with the help of a walker. She uses her upper body strength to fall back on the therapy table and can bring herself back into a sitting position. She has learned to dry and style her hair and applies her own makeup. She texts her friends from her cell phone and walks laps around the swimming pool at Opportunity Living in Lake City.

“I do a lot of pool therapy,” she said. “I can walk laps in the pool; you have a lot less weight on you in the water.”

Gorden attends classes at South Central Calhoun and looks forward to graduating in May. This weekend, she’s going to the prom. Next year, she plans to take classes through Iowa Central Community College.

Despite what a Mayo Clinic psychologist told her, Gorden has not given up on her dream of becoming a nurse. Instead, she found her inspiration in Dr. William Scelza, her primary doctor at Craig, who also experienced a spinal cord injury.

“The psychologist at Mayo told me I should find something else to do with my life, but then I get to Craig and my doctor is in a wheelchair. He was paralyzed when he was 16,” she said. “He recovered and was able to become a doctor.”

Gorden was recently accepted into Craig Hospital’s Neuro Recovery Network, a 12-week intensive therapy program that will help her continue to improve. The program costs more than $20,000 and the Gordens’ insurance only covers a limited number of therapy sessions in one year.

To help offset the costs, Brittanie Gorden has set up a fundraiser for her sister by selling “Believe” T-shirts. The shirts are sponsored by local businesses who have donated $50 or more to the cause. They’re available for $15 and can be purchased by contacting Brittanie Gorden through the Prayers for Mackenzie Gorden Facebook group at www.facebook.com/groups/mackenziegorden, by phone at (712) 210-4676, online on eBay or at South Central Calhoun School in Lake City. Donations can also be made online at fundly.com/believe-in-mackenzie.