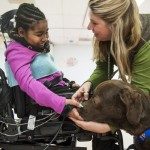 WASHINGTON — Asheauna Pryor loves dogs. Her pit bull, Dre, may be her favorite, but she lights up when a Chesapeake Bay retriever named Lewis is around.

The two often play one of Lewis’ favorite games: hide-and-seek. At a recent visit, Asheauna sent him out of the room and hid his toy and ball. When Lewis returned, he needed several clues to find the toy. But when asked where the ball was, the retriever didn’t disappoint. Within seconds, Lewis sniffed it out from behind a mat.

“Well, that was fast,” Asheauna said with a laugh. Then it was on to more hiding and seeking.

This might seem like all fun and games, but the weekly sessions involving Lewis and Asheauna have a serious purpose: to help the 8-year-old move her arms and hands.

Asheauna, who lives in Prince George’s County, Md., began feeling weak last fall on one side of her body. Doctors found a tumor, or abnormal growth, on her spinal cord that was causing the weakness. She had surgery in December to remove as much of the tumor as possible. During surgery, part of Asheauna’s spinal cord was damaged, and afterward she was unable to move her arms and legs. She needed help getting around in a wheelchair.

A few weeks later, Asheauna arrived for a months-long stay at Baltimore’s Kennedy Krieger Institute, a hospital that helps injured children and teenagers learn how to move again and how to perform activities that they need to do in everyday life.

It can be hard work to learn how to use your arms and legs again, but Kennedy Krieger tries to make it as much fun as possible through activities including field trips, cooking lessons and an unusual program with four-legged friends.

Animal-assisted therapy, a five-month-old program, brings dogs into the hospital once a week to help kids improve skills such as grasping, throwing and moving their wheelchairs. These dogs are different from service dogs who are trained to do tasks for their owners.

Kids who have pets at home get a special benefit from working with the dogs, said Sherry Fisher, who heads the program.

“This really helps them feel like they have a sense of home,” Fisher said.

Asheauna’s family heard about the therapy and signed her up soon after she arrived at Kennedy Krieger. Asheauna has worked with several dogs, but Lewis is her favorite.

Lewis enjoys hide-and-seek and fetch, but he’s not a typical, high-strung 2 1/2-year-old Chesapeake, said his owner and handler, Amy Wernecke.

“He’s crazy at home sometimes,” Wernecke said. “But he knows that here he has to be calm.”

Lewis looked content as he walked slowly through the hospital hallway next to Asheauna as she controlled her power wheelchair. Then he stood still as Asheauna brushed his fur. He didn’t react when a large pile of mats fell over and made a loud smacking sound.

Lewis’s temperament helped him become a therapy dog, but he and Wernecke also have had a lot of training. They completed two obedience classes and a six-week class at National Capital Therapy Dogs to make sure Lewis wasn’t too nervous or excitable.

Then Fisher had to make sure he would work well with patients.

“We assess the dogs as they come in and give them a try,” Fisher said. “If we see that maybe it’s not the best fit, we then make sure that there’s another place that they can come in and help us out.”

Fisher and therapist Kaitlin MacDonald said Lewis has been a good match for Asheauna. They talk about his visits to her for days in advance, MacDonald said.

“Using the dog is such a motivator to get her to do the things we need to do every day and make it a little more fun for her,” she said.

Asheauna is making progress, and in a few weeks she will head home. By then she will have a new pink power wheelchair and a special TV remote that lets her watch her favorite Disney Channel shows with a few taps of her arm. And she will have pit bull Dre by her side. But Asheauna said another canine is coming home with her.

“Lewis is going to be in my scrapbook.”

Facebook
Twitter
Email
Mix
Digg
Previous articleKitchen Remodeling For Wheelchairs
Next articleIF YOU WERE PARALYZED: Two Champion Researchers Fighting on Your Side