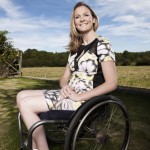 Last year Claire Lomas, who is paralysed from the chest down, was hailed as one of the most inspiring women in Britain when she completed the London Marathon in 17 days with the help of a bionic suit. Unable to feel her feet, she had to look down at every step she took over the 43km route, averaging 2.4km each day, often in the pouring rain.

She’s about to set off on her next physical challenge – a 644km hand cycle ride around England on a fundraising mission for Spinal Research and The Nicholls Foundation. The money she raises will go towards stem cell research.

‘The research is looking hopeful for the treatment of paralysed people,’ says Lomas, 32. ‘I’m hoping a cure will be possible one day. Not just for myself, I’ve got a pretty good life, but for those who are paralysed from the neck down and, unlike me, aren’t fortunate enough to be able to use their arms.’

It’s her optimistic approach to overcoming adversity that she credits with beating the despair that engulfed her after her accident.

A life-long equestrian and talented event rider, Lomas’s life changed at the Osberton Horse trials in May 2007.

‘It wasn’t an important event for me, it was just a training run,’ she says. ‘The horse clipped its shoulder on a tree. I hit the tree quite high up, knocking the bark off it, and knew straight away what had happened. It was total shock. A nightmare. I thought: “I can’t get up and I always get up.” No one can imagine what being paralysed feels like but when it happens to you, you know what it is instantly.’

Lomas had surgery immediately, contracted pneumonia soon afterwards and was admitted to intensive care but discharged herself after just eight weeks in hospital.

She was unhappy with the rehabilitation she was being offered and felt that as a former chiropractor and sportswoman, she could do a better job herself.

‘They didn’t work my legs,’ she says. ‘The view was the legs don’t work, so they’d only offer physiotherapy to the bits that do work that could improve.

‘I wanted to exercise the bits that didn’t work and try to maintain my fitness in case research reaches a point to enable me to use them again. They don’t want to give you false hope – but I don’t think a bit of hope is a bad thing,’ she says.

The first year after the accident was difficult. Not only did Lomas have to undergo months of rehab – ‘Simple things, like not being able to sit on a bench, were incredibly frustrating,’ she says – but she had to give up the sport she’d devoted her life to.

During our interview, Lomas only seems upset when talking about going to events and seeing other people ride the horses she’d spent years training.

‘I didn’t know whether to go or not,’ she says. ‘It was hard but if I go now I can enjoy myself.’

More than losing her mobility, Lomas’s main concern was that her disability would prevent her becoming a mother. ‘Not being able to walk was a huge loss, so was not being able to do eventing, but the biggest thing on my mind was would I meet someone?’
However, she joined a dating website and met her husband, Dan, after three days.

‘It was probably one of the scariest things I’ve done,’ she says. ‘The fear could easily have stopped me but thank goodness it didn’t.’

She was upfront about what her disability entailed right from the start. ‘I told him about my catheter on the second date,’ she laughs. ‘It’s a big issue. With spinal injuries, not walking is the easy bit. It’s so much more than not walking. It affects your bowels, bladder, temperature regulation, everything – it’s really bloody difficult. Luckily, Dan is pretty exceptional.’

The couple had a daughter, Maisie, two years ago. ‘The marathon was great but it wouldn’t have been the same without Dan, Maisie and my parents being there,’ she says.

‘If I was told during my down days I’d meet someone and have a baby, I wouldn’t have believed them.’

Lomas wasn’t awarded with a medal for completing the marathon as rules state entrants need to complete the course within 24 hours. However, 18 runners sent their own medals to her instead.

‘That meant a lot more than being awarded one of my own,’ Lomas says, adding that she’s surprised by the number of letters she gets from people thanking her for inspiring them to overcome challenges in their own lives.

She gives talks to schools and has a similar response from the students. ‘They say: “You’ve changed the way I think.” I just want to encourage them to get out there and do stuff. It’s strange. I’d never have had this opportunity if I was still on horses.

‘I sat and dwelt on the things I couldn’t do for a long time after the accident and then stopped and turned it around. If I hadn’t, I’d still be sitting there thinking “poor me”. That creates a miserable life. Thank goodness I stopped myself because I’ve had the best days of my life since the accident. Just amazing days. And I’d never have believed that was possible in the first year, ever.’

To join Claire on part of her fundraising journey, go to http://www.clairescycle.co.uk. To donate via Vodafone’s free JustTextGiving service text LEGS60 £3 to 70070.