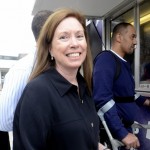 Ann Spungen, the principal investigator of the VA’s exoskeletal-assisted walking study, is excited about the ReWalk, a device invented by an Israeli scientist that allows paraplegics to walk again. ‘In the 22 years that I have been working in this field, it’s the most exciting intervention to come along.’

A research doctor at the Bronx VA is turning paralyzed vets into Iron Man.

And she’s doing it one man — and woman — at a time, with a robotic exoskeleton called the “ReWalk.”

Think of the high-tech body suit that Robert Downey Jr. donned in the movie that transformed him from mere mortal into a superhero machine and you have a fair idea of the bionic suit that physiologist Ann Spungen is using to give wounded warriors and other people with spinal cord injuries a shot at walking again.

“It’s phenomenal technology,” said Spungen, the principal investigator of the VA’s exoskeletal-assisted walking study and associate professor of medicine and rehabilitation medicine at Mount Sinai’s School of Medicine. “In the 22 years that I have been working in this field, it’s the most exciting intervention to come along.”

The brainchild of Israeli scientist Amit Goffer, who was paralyzed in a 1997 accident and disheartened that a wheelchair was all the medical world had to offer, the ReWalk exoskeleton enables paraplegics to stand, walk and climb stairs.

“I was skeptical at first, but when I saw this paralyzed man walk up and down our halls, it was just amazing. I thought, ‘This technology is the wave of the future,’ ” said Spungen.

The ReWalk is being extensively studied at the James J. Peters VA Medical Center in the Bronx, the first hospital in the country to examine the secondary medical problems of paraplegics and the health benefits of regaining the ability to stand and walk.

Spungen, who is presenting her findings to NATO in Italy this week, said that in the first year of the study they have found participants’ diabetes and bowel function improved. In addition, all of the participants have lost fat tissue mass, even in their paralyzed legs. One person has even begun to regain a small amount of feeling and movement in his legs.

The $60,000 ReWalk has been a life-changer for the nine men and women who have been involved in the study to date. Study participants included a New York firefighter and Robert Woo, the architect who was paralyzed from the chest down in 2007 when a crane dropped seven tons of steel on a Goldman Sachs construction-site trailer near Ground Zero.

“If I could take this home, I would use it all the time. I would love to walk with my children to the park, stand up and give my wife a hug, reach for things myself, go back to work,” said Woo, 45, who miraculously survived the accident. “While I used it continuously during the study at the VA, my circulation and digestion were much better, and I even have some muscle control in my legs now.

“Everything I gained during the study, I am starting to lose now,” he said.

To suit up, participants first slip into sneakers that have a foot plate attached to the exoskeleton. Then they strap padded, motorized leg braces to their calves and thighs. The exoskeletal legs are also connected at the hip with a metal pelvic band and additional straps around the lower and mid-trunk give support.

A five-pound backpack holds the computer and two batteries that power the device. Two arm crutches are used to maintain balance.

Once standing, the person pushes a start button on a Dick Tracy-like wristwatch, and leans forward with the upper body. The body movement is sensed by a “tilt sensor” that sends a signal to the computer to trigger the first step. Shifting the upper body from left to right generates a sequence of walking steps.

On the first day, most people learn to stand, shift their weight and take a step or two. It takes a few one- to two-hour sessions to learn to coordinate continuous walking and then, with a staff person spotting behind for safety, they are on their way.

Army veteran and Bronx resident Gene Laureano, who is currently in the middle of the program, named his exoskeleton “Harry.”

The father of four fell off a 20-foot ladder during a Manhattan construction job in 2001 and was paralyzed from the waist down at age 38. Sitting in a wheelchair all day long for 12 years has been a nightmare.

“When I get in it and start walking, I feel normal like everybody else. It’s the greatest feeling to be eye level with people,” said Laureano, 50, as vets cheered him on last week, shouting, “It’s Robocop!” as he walked over to the coffee truck outside the hospital.

Laureano, who is 6-foot-3, said the first time he stood up in January he came close to tears.

“When my session ends, it’s like parting with a friend. I tell Harry, ‘See you tomorrow.’ I’m like a little kid when I get this on. I can’t get enough.”

Theresa Hannigan, a paralyzed retired Army sergeant from Long Island, is so agile with the apparatus that she walked a mile in the exoskeleton last fall to raise money for “Hope for Warriors.”

On March 21, during a visit to Israel to demonstrate the ReWalk at a technology exhibition, she became the star attraction when an impressed President Obama gave her a bear hug after chatting with her about her regained power.

Hannigan, 60, suffers from a neurological autoimmune disease, which left her paralyzed three years ago.

She used the opportunity to lobby the President for FDA approval of the device.

“I told him (Obama) the Israeli soldier who demonstrated the exoskeleton with me is allowed to take it home and use it in his everyday life, as can people in Europe, but I can’t. He said, ‘I got the message, and thank you.’ ”

The FDA is currently studying the ReWalk to make sure it is safe for home usage. Spungen and Laureano recently testified before the agency on Washington, urging it to approve the device.

Hannigan also testified, but by telephone.

Her message to the FDA?

“Please don’t make me beg for something that is really, really needed. Please find it in your hearts to give me back my independence. It’s something that was taken away from me. A device like this won’t give me 100%, but it will give me back a lot more than what I have now.

“I was told there wasn’t a dry eye in the place,” said Hannigan. “We are all hoping they will hurry up and approve this.”

On a mobile device? Watch the video here.

Paraplegic not held back by tractor mishap