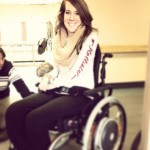 “It’s like going from 21 to zero, when you first learn to crawl and walk. Now I have to learn to move my body in a whole different way.”

When Janice Wray lost control of her car on Route 95 in Connecticut last year, everything stopped. A 2009 graduate of East Greenwich High School, Janice was in her third year of nursing school at the University of Rhode Island. Now, suddenly, she was paralyzed from her chest down.

“It’s like going from 21 to zero, when you first learn to crawl and walk,” Janice says now. “I have to learn to move my body in a whole different way.”

She stayed in the ICU at Yale–New Haven for a month (her accident took place just outside New Haven, in Watertown). After that, Janice moved to Spaulding Rehabilitation Hospital in Boston. She returned home to East Greenwich last July 26.

“I’m paralyzed from right at my chest down,” Janice explains. “I don’t have movement in my hands, but I feel my hands. My arms are fine.”

Her spinal cord injury is a C-7, the site on the spinal cord where her injury occurred. For comparison, U.S. Rep. Jim Langevin is a C-6. In general, the lower the injury takes place (C-7 is lower than C-6), the more functionality a person will retain.

Janice knows she will not walk again.

“At first I thought I was going to have to change,” she says. “At Spaulding, I was really sick. I had a collapsed lung. My therapists saw me as this timid young person.”

But timid – that was never Janice.

“I was so independent,” she recalls. After the accident, she thought, “I have to give up my whole life, everything that’s me. Then when I got home, I realized I can still do everything, but just differently.”

After Janice’s father died when she was 16, she took up running to help her cope.

“I would run through the cemetery where he’s buried,” she said. It was therapy. She decided she wanted to be able to do that again. In the process, she was able to show her therapists a bit of who she was before the accident.

Her therapists borrowed a handcycle and took Janice and the handcycle to the cemetery, “so I could wheel around the cemetery just like before. It was just awesome that they came down to do that for me,” Janice says.

These days, getting stronger is her full-time job – made easier by the fact she was already a fitness enthusiast. “I go to therapy five days a week because I love it. It’s become a workout session.”

Janice goes to Southern New England Rehab Center at St. Joseph’s Hospital in Providence. Friends and family members take turns providing transportation. She’s come a long way from her first days at the center, says Kerri McMahon, one of the physical therapists who work with Janice.

“She’s progressing very well,” says McMahon, during one of Janice’s hour-long sessions. She jokes that now she’s able to “ignore” Janice a little, to walk into another room briefly, even. Early on, that would have been impossible.

The therapy helps physically, of course, by helping Janice get stronger, but it also helps to keep her healthy and focused on something other than the nerve pain that is a constant companion.

It turns out that just because she can’t feel her legs, for instance, they still register discomfort, but not in the way we’re used to, since the connection is broken between the nerves in her legs and her brain, which would normally process “messages” from her legs. So, the body puts out the message in different ways.

“Nerve pain is different than any other pain. It’s like an electrical burning … like having your hands go through a meat grinder … all the time, 24-7,” she says.

Janice is learning to “read” the messages her body sends. At therapy, if she bends too far – a position that for most of us would cause muscle pain – she’ll get goose bumps. But a lot of times, the messages are much harder to decipher.

Like when she gets hot for no apparent reason. It could be something as simple as a crease in her pant leg, pressing against her skin, or it could be an infection that will need medication. She’s also burned her hand without realizing it because the teacup she was holding was too hot. The burn was only detected the next day, when they were trying to figure out why her hand was so red. Figuring it all out continues to be a work in progress, as do all the tasks of daily living.

“The simplest things are so hard,” Janice says. “Getting out of bed takes 15 minutes.”

She’s enormously grateful for her family. “My family’s so patient with me. I’m so blessed – I couldn’t do it without them,” she says. All four Wray children are living at home with their mom, Susan. In addition to Janice, there’s Linnie, 24, who’s decided to follow her sister’s lead and go to nursing school; Elizabeth, 18, a senior at EGHS; and Matthew, 15, an EGHS freshman.

She adds, “I cannot imagine doing it without God and church and my faith at all.”

“It takes a lot of effort from a lot of people to help me. And the stuff that I can’t do, I’m so determined to do it.” Her most recent victory? Putting on her own makeup.

Janice realizes she won’t be able to be a typical nurse, since nursing is such a physical job.

“I’m hoping that I can finish with a master’s as a nurse practitioner,” she says. She’s had a lot of encouragement from her doctors, including one who was also in a wheelchair.

Janice recognizes her paralysis has changed how people look at her. Initially, a few of her friends were afraid to see her, afraid of how they would respond. They had to see, she said, “I’m still me.”

She understands, too, that she’s seen as an inspiration. “That’s humbling. I can’t take credit for it.” But, she adds, “If God could use this, than I would love to be used.”

“No, I’m not going to walk again.” But she adds, “There’s also a power in not being healed.”

This is the second part of a two-part series. To read the first part, click here.

Proceeds from the East Greenwich Rotary Club’s Taste of East Greenwich this Friday, May 18, will go to helping make Janice’s house more accessible. If you are interested in attending, click here.

Avatars take to the stage in SPINE