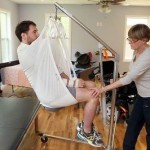 An unfamiliar, unlit pool and a split-second decision to dive.

The 28-year-old University of Georgia graduate broke three vertebrae in his neck, leaving him largely paralyzed from the shoulders down.

“This is something I’m still coming to terms with in some way every day,” said Jones, who worked as a governmental affairs officer for the Georgia Public Safety Training Center before his accident last August.

“Once upon a time, I could wake up and be ready to go to work in 30 minutes,” said Jones, who moved back into his parents’ ranch-style home in Carrollton, Ga. “Now it easily takes an hour and a half.”

As summer approaches, folks will begin using pools, lakes and other waterways. Jones has one warning: don’t dive.

Motor vehicle accidents and working mishaps account for the largest percentage of the more than 1.27 million spinal cord injuries — about 52 percent, according to the Christopher & Dana Reeve Foundation and the Centers for Disease Control and Prevention. Sporting and recreational activities account for 16 percent.

The study doesn’t break out how many are diving-related.

However, the University of Alabama at Birmingham National Spinal Cord Injury Statistical Center says since 2005 between 3 percent and 5 percent of all spinal cord injuries are the result of diving accidents.

Diving-related accidents “fly under the radar, but when they happen, they are so significant and catastrophic,” said Bridget Metzger, director of injury prevention and education at the Shepherd Center.

I didn’t realize I could get hurt that way.

I’ve been diving in that same place my whole life.

People don’t think about shifting rocks and sand. Or that they’re now 6 feet tall and diving into the same shallow body of water as when they were younger and smaller.

Experts suggest that swimmers don’t dive at all, or at least jump in the first time. Other tips: no alcohol, avoid murky water and know the water’s depth.

Metzger said, “What’s so frustrating about diving accident injuries is that while they’re relatively rare, they are so preventable. You’re dealing with one person making one decision. It’s not like a car accident where there can be a million factors.” Jones, a self-described “water rat” who once swam off the coasts of South Africa and Mozambique, was injured at a party. He hadn’t planned to go swimming. He did a “fairly benign” dive and thinks he hit the bottom of the pool’s shallow end.

He must have lost consciousness. When he came to, he was floating face down in the water. He knew immediately something was wrong.

“Any head-first dive is really not worth it,” said Jones, who hopes to one day return to work. “I’d rather be dealing with two broken ankles than a broken neck.” It’s been a trying year for Jones, who has regained some movement in his arms, hands and neck. His mother, Sandra, helps him exercise to strengthen his muscles, and he has to use a lift to move from his bed to a motorized wheelchair.

You can’t live your life in fear, but you can be smart, said Alan T. Brown, director of public impact for the Christopher & Dana Reeve Foundation, a New Jersey-based nonprofit that funds research and helps improve the lives of people living with paralysis.

Brown was paralyzed while on vacation in Martinique when an undertow pulled his legs out from under him while, at the same time, a wave crashed down on his body.

Spinal cord injuries can be not only damaging physically and emotionally, but financially as well, he said.

During the first year, for example, medical and living expenses can range from $750,000 to more than $1 million, depending upon the severity of the injury, according to the University of Alabama at Birmingham.

It was nearly a year ago that 16-year-old Austin Whitten, a high school sophomore in Lafayette, Ga., was severely injured as he and friends were celebrating the end of school.

The accident last June left Whitten, an avid football, basketball and baseball player with a promising future, paralyzed below his upper chest.

They were just goofing around, having a good time when they decided to go swimming in the above-ground pool at his buddy’s house. Whitten did an unintentional belly flop. Afterward, Whitten realized he couldn’t move his arms.

One numbing thought raced through his mind: “I can’t be paralyzed!” Two friends helped pull him out of the pool, and one of the parents — a nurse — kept his head stabilized.

He spent nine days in a Chattanooga, Tenn., hospital before being moved to the Shepherd Center for several months.

Whitten gives credit to his support system and his faith in God and now helps coach a Little League team.

“If you see a no diving sign, don’t dive,” he said. “And if you don’t see a sign, pretend there is one. People dive every day. I’ve dived a thousand times, and that one time, I broke my neck.”

Stingley remembered for determination in face of paralysis