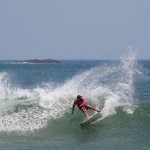 CAPE MAY – September has been described as “locals summer,” when the air and water are still warm, and the beaches are not crowded. Chad deSatnick, then 23, was surfing off Poverty Beach, Sept. 30, as he had many times before growing up in Cape May. At the end of his last run, however, his surfboard struck the steep beach break created over the last 10 or 11 years of a state and federally subsidized beach replenishment program. When the board hit the severely sloping sand, deSatnick was toss head first into the hard, wet sand.

His neck hurt, he knew that much, but he was still able to function. He walked around for about a day and a half before his father noticed his was holding his arms away from his body. When asked what was wrong, Chad told his father his arms were tingling.

His father, Dennis deSatnick told him to go to the nearby office of Dr. Andrew Drake. The doctor quickly recommended going to the Burdette Tomlim Memorial Hospital (now Cape Regional Medical Center) for X-rays. After assessing the situation, the hospital put Chad on an ambulance and sent him to the Atlantic City (now AtlantiCare) trauma center with fractures in two cervical vertebrae.

“The trauma center called here at 1 a.m. thinking he still lived here,” said his mother, Anita deSatnick. “The doctor said he was stable for now.”

That information was hardly reassuring for the deSatnicks, who up to that point had no idea their younger son was seriously injured. They were told that the surgeon was waiting on a surgical instrument to be shipped from Texas.

When the deSatnicks arrived at the trauma center, the medical staff had put a halo brace on Chad, which has pins that keep the head from moving. Anita deSatnick said the doctor started talking about Chad and his injury, and as he did, the atmosphere became surreal to her. She said it was like a curtain went up, separating her from them.

“The doctor was saying he is young and healthy, and that is in his favor, but it was like he was talking about someone else,” she said.

Anita said it was like she was simply overhearing what the doctor was saying when he talked about opening the neck and the procedure he was going to attempt.

“I knew he was talking about someone, but not my child,” she said.

By the end of the week the instrument had arrived and Anita was very much aware it was her child who had gone into surgery, where he would remain for 11 hours.

“We were apprehensive, not knowing what it was going to be like,” said Dennis deSatnick. “We were under a lot of emotional stress.”

Still, Anita deSatnick said she never felt the incident was going to turn out badly, perhaps willing herself to believe so, or getting the sense from some higher authority.

“In my heart I never thought the worst would happen,” she said.

As it turned out, the doctors told the deSatnicks that if the break had gone another half-inch the injury would have been much more serious.

Dennis said the years passed and he had not felt those emotions until Aug. 5, when 17-year-old Archer Senft was knocked down by a wave, fracturing two cervical vertebrae. While their son was able to walk after his injury, the Senft youth is paralyzed from the neck down, cannot speak, swallow, or breathe on his own. He is communicating by mouthing words and blinking his eyes.

Their own son went through a long rehabilitation program, and is still engaged in a maintenance program, but at times he still feels stiff from the 14-year-old injury.

“But he never complains,” his mother said.

“They’ve been aware of the problem for 12 years and I don’t feel they are doing a good job moving on the beach,” deSatnick said. “We have to do whatever we have to do in order to make the beaches safer.”

Chad deSatnick spoke at the Sept. 1 city council meeting, and told council there have been over 200 neck injuries on Cape May beaches since 2001.

“That’s 200 that we know of,” Dennis deSatnick said. “There are probably others who sought treatment on their own that we don’t know about.”

Anita said as serious as her son’s injury was, there is no comparison with Archer Senft’s injury and resulting paralysis and complications.

“His family had no idea what was going on,” Anita said.

She said last on Aug. 26 Senft was flown to Atlanta, Ga., where he was checked into the Sheppard Center, which offers specialized treatment and rehabilitation for spinal cord injuries. She said Archer’s mother is staying there with him, leaving her husband in Baltimore to care for their other three children.

“The whole family has been uprooted,” Anita said.

She said the dangerous beach break has already forever changed the lives of an entire family, not to mention caused harm to at least 200 more.

If anything good has come out of their son’s injury, Dennis said, it’s that he has see his son become a giving person. Having realized how fortunate he is, Chad has become involved with promoting organizations such as Life Rolls On and They Will Surf Again, which offer support to those who have suffered spinal cord injuries. He has also become involved in numerous cancer fundraising functions.

deSatnick said he is trying to drum up more support for addressing the beach break issue. Ultimately, he said, it will come down to physically altering the beach, which the city said it is prevented from doing under an agreement with the state. deSatnick said anyone who is interested in working on the project and hopefully saving others from injuries such as those suffered by his son and by Archer Senft, should call Dennis at deSatnick Window Fastions at (609) 884-2545.