Big Hand For A Big Ride 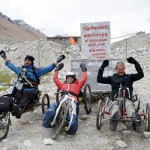 A team of tetraplegics epic hand-cycle quest to the roof of the world and back is due to be completed today.

The team of cyclists, including three Kiwi tetraplegics, on hand-cycles led by CatWalk Trust founder Catriona Williams of Masterton is scheduled to ride into Kathmandu today after their 1000 kilometre journey up to Everest Base Camp and back down.

It was a real adventure for the team of 15 as they had to cope with the altitude, pain, breakdowns and the weather to reach their goal. The hand-cycling trio of Catriona Williams, Neil Cudby and Rob Creagh had a drama filled final push for Base Camp as they had to deal with gear failure on the rough, pot-holed roads.

After Neil Cudby’s handcycle broke down they used a pink dressing gown cord as a tow rope and Rob Creagh towed his buddy up the final section. In a world first, all three hand-cyclists rode together for the final 100 metres to the base camp and though they were all sore from the exertion and had headaches from the altitude, there wasn’t a dry eye among them as they reached this important destination, according to CatWalk spokesperson Meg Speirs.

The Big Cycle team set off for the Himalayas on June 10 and is due to return to New Zealand this weekend.

The team set themselves an ambitious goal of raising $1 million for the CatWalk Spinal Injury Trust and they are almost two- thirds of the way towards target.

Ms Williams, a former world -class equestrian, founded the CatWalk Spinal Cord Injury Trust after she was injured in a riding accident in 2002.

The trio were supported by 12 able-bodied cyclists and carers on the expedition.

The journey began a year before the crew made it to Nepal, with the team undertaking an intensive preparation programme that included fitness training and work in a hyperbaric chamber to get used to the high altitudes on the 1000km ride through 10 Himalayan passes.

PossAbilities participating in the Run Through Redlands