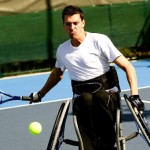 A FORMER City worker from Cobham confined to a wheelchair after a car accident almost 10 years ago has become one of the county’s first disabled fitness instructors.

John Parfitt, 33, who lives in Between Streets, worked at Bloomberg for a decade before leaving his job in 2009 to follow his passion for sport.

Having sustained a spinal cord injury nine years ago, Mr Parfitt, a fitness fanatic, had hoped for a place in Great Britain’s wheelchair rugby squad.

Missing out, he went on to compete for the country in wheelchair tennis, which he hopes to become a coach for.

He has completed an InstructAbility fitness instructor course with Aspire, a charity helping people paralysed by spinal cord injuries, meaning he can train disabled and able-bodied people in gyms.

“I had always been a big gym user before my accident and afterwards,” he said. “You have to be quite strong to take part in wheelchair tennis and rugby.

“I had heard of Aspire. They have their head office in Stanmore and that is where I had been having my rehabilitation. When I heard they were doing the course to train disabled people to be instructors, I applied.

“The idea really appealed to me and I thought I could get good at it. I wanted to inspire people with disabilities.

“We started the training in March. It was an eight-week course so now I am a qualified fitness instructor. I have been working at the Xcel Centre in Walton since May part-time, working two or three days a week.”

Some gyms, however, are less welcoming. “When I was first injured, I went to a local gym and felt the instructors either weren’t skilled or didn’t have time to go through a fitness programme with me – they just told me to use a hand bike.

“Through InstructAbility, I’ve learned about a variety of different things on offer for disabled gym users,” he said.

Hilary Farmiloe, national project manager from Aspire, said: “The success of the 2012 Paralympic Games has raised aspirations of disabled people as well as changing people’s attitudes.

“InstructAbility, a 2012 Inspiremark initiative, has enabled John to demonstrate his ability rather than being limited by what other people think.”

Disabled people in Surrey are being offered a chance to take part in the course at Guildford Spectrum, funded by Sport England.

The course is available to anyone disabled, over 16 and out of work.