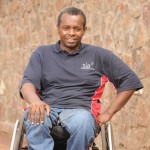 Tony Stephenson became a wheelchair user at the age of 25 after contracting TB meningitis. He tells Health Correspondent Julia McWatt how he’s using his experiences to help others

When Tony Stephenson became extremely unwell in his early 20s, doctors initially put it down to flu.

But as his body struggled to fight off his illness and he became increasingly sick, it started to become clear that he needed urgent medical care.

After a number of tests at Llandough Hospital, Tony was diagnosed with TB meningitis – a condition where tuberculosis bacteria invades the membranes and fluid surrounding the brain and spinal cord.

The condition normally begins with vague symptoms of aches and pains, low-grade fever, feeling unwell, tired, irritable, not being able to sleep or eat properly, and a gradually worsening headache. It can also cause major complications.

Tony, who is now 45 and lives in Whitchurch, Cardiff, had to undergo an intensive 18-month course of antibiotics due to the advanced stage of his disease. He managed to return to work as a store detective, but began losing strength in his legs.

Doctors found he had arachnoiditis (scar tissue and adhesion) and a serious syrinx (cyst) in his spinal cord as a result of his TB Meningitis. After five unsuccessful operations, he became a wheelchair user at just 25 years old.

He said: “I had been ill for quite a while, but I was diagnosed with flu as TB meningitis gets all the close symptoms of flu. Eventually I was so ill that I had to move back in with my mum. She then called the GP and they insisted that I was taken to hospital.

“I went into Llandough Hospital an they did some tests on me and they found it was TB meningitis. I spent nearly two years on antibiotics, which left me weak. It was then found I had adhesions to the scar tissue around my spinal cord and the cyst had developed.”

He said he had some very difficult times following the operations, but it was the support of his family that helped him through it.

He said: “It took a while for me to get used to being in the wheelchair. I spent a couple of years not doing anything, just sitting at home watching daytime television. But I am from a large family and my brothers and sisters insisted that I carried on doing things. They did not pander to me.”

Four years after his initial illness, Tony began volunteering with the Spinal Injuries Association (SIA) at Rookwood Hospital in Cardiff.

And he is still using his skills and experiences to work with others who, as result of accident or illness, have a spinal cord injury.

“I heard the SIA were looking for peer support volunteers. I started volunteering one day a week and just became more and more involved. It is a fantastic charity which is completely dedicated to helping spinal cord injured people and their families. It was very rewarding,” he said.

“The more I did it, the more I wanted to help others. A lot of these people have had accidents and have become paralysed through no fault of their own. It is a life-changing thing to happen.”

This new service will offer spinal injured people being treated in a hospital or neurological centre the opportunity to receive dedicated peer support and advice, including home and hospital visits, which patients would usually only receive at a dedicated spinal injuries centre.

It is the first time Wales has had its own peer support officer who works in the community rather than solely in spinal injuries centres.

The spinal cord communicates two-way messages to and from the brain and skin, muscle and organs of your body.

When it is damaged it interrupts the flow of messages, leading to the loss of movement and sensation in different parts of the body, however the extent of this loss depends on the extent to which the spinal cord has been damaged. A spinal cord injury is permanent.

Tony said: “I’m really pleased that, with the support of NewLaw, they’ve been able to take me on as a full-time peer support officer for Wales.

“It’s vitally important that newly injured people and their families get as much support as possible – and this is not always possible in hospitals which don’t specialise in spinal cord injury treatment. In this new role, I will be able to provide advice and support for people who really need it across Wales.

“Hospitals are able to provide medical assistance, but what you really need when you sustain a life-changing injury is reassurance that life goes on. You need the practical advice that somebody who has been through a similar situation can give you – from where to get legal support to refurbishments you can make to your home to adapt it for wheelchair use.

“We don’t give medical advice but we do help people, and talk to them about what it was like to go through that situation. It may not have been the right way for them but it shows them how I coped. It can show them the other side and that you can live a fulfilled life. I’m privileged to be able to provide that support.”

Helen Molyneux, CEO of NewLaw, said: “By launching this service with the Spinal Injuries Association, we are providing spinal cord injury patients across Wales with the emotional support they need outside of the hospital. Our personal injury service means we see a lot of people with spinal cord injuries and, although we are already able to help by fighting for the compensation they need and deserve, sponsoring this new service means we can also provide emotional and practical support outside of the court room.

“This service is not just for our clients, it is available for all Welsh spinal injury patients who need extra support.”