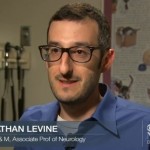 Ongoing research on paralyzed dogs may one day help military veterans and others who have severe spinal cord injuries.

Researchers at the Texas A&M College of Veterinary Medicine & Biomedical Sciences have developed a therapy that might help paralyzed dogs regain some of their lost function.

“One of the big obstacles in the past has been a lot of the research has used rodents and experimental animals,” lead researcher Dr. Jonathan Levine, an associate professor of neurology and neurosurgery at Texas A&M told CBS Dallas/Fort Worth’s Karen Borta. “Despite an abundance of clinical trials a lot of money spent in humans, the results have been disappointing.”

Levine and his team received a $900,000 grant from the Department of Defense (DOD) to develop non-invasive therapies for spinal cord injuries in dogs with the hopes of translating that research to people.

Levine’s team is testing a drug that would block the enzymes — which are proteins that cause chemical changes in the body — that break down the spinal cord following injury.

A spinal cord injury is the second most costly injury according to Texas A&M — a person who has sustained one at 25 years old may rack up anywhere from $729,000 to $3.2 million in expenses for the rest of their lives.

“Hopefully what that is going to lead to is better mobility, better ability to empty the bladder and that is going to be beneficial of course to dogs and hopefully that can be scaled up to humans as well.”

One paralyzed veteran who was injured by an 1,100-pound falling crate in 1996 says any progress will bring him and his fellow vets hope.

“Anything to improve the quality of live that would be the best,” said Glendon Bentley, executive director of the Lone Star Chapter of Paralyzed Veterans of America.

He said it would be “phenomenal” if this research led people who were paralyzed to possibly progress from a wheelchair to a walker or leg brace.

This isn’t the only research that’s looked at dogs in an effort to help humans.

British scientists reported in Nov. 2012 they successfully got dogs with spinal injuries to regain their ability to use their limbs by injecting their injury sites with cells taken from the linings of their noses. The cells helped produce more nerve cells, scientists at Cambridge University reported.

New wheels at St. Mary’s makes getting around easier