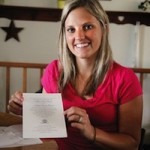 Just like any other bride, Alissa Boyle finds herself immersed in

wedding plans leading up to her Sept. 7 exchange of vows with Nathan Grimes at Lisbon Trinity Friends Church.

And just like most brides, Boyle envisions walking down the aisle with her father, Jim, while her mother, Lori, and family and friends watch.

But Boyle’s preparation is unlike other brides. She spends hours in physical therapy and exercising at home to make that vision a reality. She was injured in an accident Feb. 20, 2012, that damaged her spinal cord. She and a friend had stopped to assist at a car accident but ended up being hurt themselves.

She also copes with spasms in her legs.

Thanks to Butler-Goshen Township Community Fund, she received a “standing frame” that helps support her weight as it moves her to a standing position. “I can wheel around on it as well,” she said. The frame, she explained, is good for her joints and helps stretch her tendons. “It works wonders,” she said.

When the accident occurred, Boyle’s parents were on vacation in Jamaica. When they arrived at the hospital, she told them, “I got

engaged, I saved a life and I can’t feel my legs,” Boyle said, adding

they were all “life-changing events.”

Grimes had proposed Feb. 18. They’ve known each other three years and were introduced by friends. Boyle described Grimes, 25, who has been in the Army eight years with tours of duty in Iraq and Afghanistan, as “incredibly caring.”

“He pushes me to exercise and go a little farther,” she said. “He’s told me I’ll run.”

She also said her parents “have been incredibly supportive.” Her brother Tyler, 25, and his wife, Rachel, of Hartville and brother Travis, 27, of Cleveland also have lent emotional support and helped in many ways. “We’re close,” Boyle said, adding that her accident reinforced family bonds.

She also said she turns to her faith in God.

Boyle said she is looking forward to walking down the aisle with her father. Her brothers and sister-in-law are in the wedding party of 14. She’ll be wearing full leg braces under her wedding gown.

She’s already set a precedent by standing for a ceremony in May 2012 at Waynesburg University, where she received the Presidential Medallion for her Good Samaritan effort.

Boyle said her therapy and wedding have been made possible by not only her family but the community at large.

“Therapy is all out-of-pocket,” she said of the expense. The community has sponsored fundraisers to help and a Cheers for Alissa Fund.

Boyle said she has been touched by the generosity of strangers. She was contacted by Jaimie’s Dream Team, whose mission “is to lift the spirits of those suffering from, and ease the burden caused by, serious illness, injury, disability or trauma.” The nonprofit organization has helped with wedding expenses.

Boyle’s A-line gown, designed with a sweetheart neckline and embellished with beading, was donated to her by a bridal shop in Columbus. Her flowers also have been donated. Center of Attention is handling the centerpieces and chair covers; Dutch Tulip, the church decorations; and Sweet Arrangements, the bouquets, which include calla lilies and roses. The wedding color is capri, a light blue.

Their honeymoon destination, a cabin in Deer Creek, Md., also is a donation, Boyle said.

“Everyone has helped make my dream come true,” she said, noting she is very thankful.

After the wedding and honeymoon, the newlyweds will relocate to Florida, where Grimes will be stationed at Eglin Air Force Base near Valparaiso. “We have lots of adventures coming up,” Boyle said.

They will live in base housing; Boyle said she will make arrangements for physical therapy and a visiting nurse. She also may apply for a service dog; she’s leaving her 10-year-old cat, Tucker, with her parents.

Boyle also is planning to look for a nursing job. “I’d like to work with spinal-cord injuries,” she said.

On Feb. 20, 2012, Alissa Boyle, 22, and Cami Abernathy of Sewickley, Pa., then senior nursing students at Waynesburg University in Pennsylvania, were on their way to clinical training at Ruby Memorial Hospital, Mount Morris, Pa. They had stopped to help at an accident about 6 a.m. on an overpass on Interstate 79 in Greene County, Pa., near the Pennsylvania-West Virginia border. They were assisting the driver, whose vehicle had rolled over several times. An oncoming tractor-trailer came toward them and fearing they would be struck, the three jumped off the overpass onto a grassy area about 40 feet below.

Boyle, who was in critical condition at Ruby Memorial, had a spinal cord injury. Boyle said it’s technically called “burst fractures” of the T-12 and L3 vertebrae. Surgery implanted two titanium rods down her back and did spinal fusion; she remained in the intensive care unit for a week at Ruby Memorial. She spent a short time at Mercy Hospital in Pittsburgh then was at Presbyterian Hospital, where a neurosurgeon removed bone fragments on Feb. 29 to reduce the swelling. Boyle was told she had a “1 percent chance of walking again.”

Boyle went back to Mercy Hospital, where she had therapy until her discharge March 27, 2012. She went to her parents’ home in Salem. Her routine includes Monday biofeedback therapy at Hillside Rehabilitation Hospital in Warren, where she uses a special bicycle to stimulate her muscles to pedal. Afternoon therapy is spent at Buckeye Wellness Center in Cleveland, which specializes in spinal cord injuries. She also spent a month at Project Walk in Orlando, Fla., specializing in spinal cord injury recovery programs.

Graduate of Union Local High School in Hanoverton and Wayneburg University with a nursing degree.

Boyle and Nathan Grimes, originally from Norton, Ohio, and son of Vicki Brown, will wed Sept. 7 at Lisbon Trinity Friends Church and be honored at a reception at Avion on the Water.