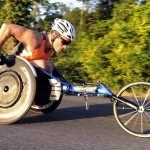 Judging from his time in the City of Roses half-marathon Sunday, a spinal-cord injury hasn’t slowed Zach Young down.

The Southeast Missouri State University student said he covered the 13.1-mile distance in about an hour and 13 minutes, winning the wheelchair division of the race.

Young, 30, of Jackson lost the use of his legs after a 2005 motorcycle accident severed his spinal cord just below his upper abdominal muscles.

For a while, the injury appeared to have ended his athletic pursuits.

“I was so into sports before, and I just kind of got out of it,” said Young, who raced BMX bikes as a teenager.

” … It was a struggle just accepting the life. There’s just so many things associated with a new life in a wheelchair. You’ve got to relearn things.”

Four years ago, a Korean War veteran gave Young a hand cycle, and he began the arduous task of developing his upper body to do the kind of work he once demanded of his legs.

“It took me a good two years to develop the muscles needed to hand cycle properly on a competitive level,” Young said.

Cycling helped Young both physically and mentally, he said.

“You know, working out physically, the endorphin rush, the social aspect of being around other athletes, being able to talk to people … just contribute to overall better health, total health,” Young said.

“I’m trying consistently to get better and better, so hopefully when it comes to the selection process for the 2016 Paralympics that I’ll be able to make the team for that,” said Young, a computer and multimedia graphics major.

For a traditional athlete, “running” means using one’s legs to move forward, one foot in front of the other.

For a wheelchair racer, running means using one’s upper body to propel the chair forward by means of a rubber-coated ring attached to the outside of the wheel.

The ring works in tandem with rubberized gloves to provide friction that allows athletes to maintain a high speed without injuring their fingers, Young explained.

Going uphill is tough. Coming back down is fun, he said, although he has been grateful for good brakes a time or two.

“There’s been a couple of sketchy moments, but for the most part, I keep it under control, and I always wear a helmet,” he said.

Barring any sketchy moments gone awry, the risk of injury in a paratriathlon — which includes a 750-meter swim, a 20-kilometer hand cycle race and a 5-kilometer wheelchair run — is relatively low, Young said.

“I’m lucky,” he said. “Running is [usually] a really high-impact sport, and it’s not in a wheelchair.”

In three years, Young has finished 15 triathlons, a full marathon, two half-marathons, three biathlons, several 5-kilometer races and an endurance event in which he cycled 82 miles in 12 hours.

“I couldn’t move my arms for, like, a week after that,” he said.

Young was one of only two wheelchair racers in the half-marathon Sunday — the first time the race has had a wheelchair division — but he expects that number to grow in the coming years, he said.

The other racer, John Payne, traveled from Memphis, Tenn., to participate, Young said.

“It’s part of maintaining competition: You have to travel far distances away … in order to get a field of competitors,” he said. ” … Just getting us all together in one place is kind of a challenge.”

Heads up! Tackling the wrong way can lead to catastrophic injuries