What Kids Should Know About Spinal Injuries in Sports 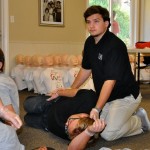 A push to alert high school athletes about neck injuries

A new push is under way to raise awareness of a little-understood but dangerous risk to young athletes: damage to the cervical spine.

It could be a hard tackle in football, a cross-check in ice hockey or a fall off the top of a cheerleading pyramid.

A new push is under way to raise awareness of a little-understood but dangerous risk to young athletes: injuries to the cervical spine, the highly vulnerable area between the first and seventh vertebrae that protects the spinal cord connecting the brain to the body. Players and teammates may not instantly recognize the severity of the damage, and the wrong move can damage or sever the spinal cord, resulting in paralysis or even death.

In addition to programs to educate coaches, parents and students, a number of groups are pressing for more certified athletic trainers who are qualified to quickly recognize and respond to spinal and other injuries.

Though less common than concussions, cervical-spine injuries most often occur when players in contact sports lower their head or tuck their chin into their chest and collide with another player, the ground or objects such as goal posts. While players often recover from injuries such as fractures of one or more vertebrae, commonly referred to as a broken neck, cervical spine injuries can also be quickly fatal.

De’Antre Turman, a 16-year-old Atlanta-area high school football player, died in August after being injured during a scrimmage, suffering a fracture to his third vertebra on the field, Fulton County Medical Examiner investigator Mark Guilbeau said in a telephone interview.

The Centers for Disease Control and Prevention estimate as many as 20,000 spinal-cord injuries occur annually in the U.S., with sports accounting for about 12%, and new cases most often occurring in 15-to-35-year-olds.

Robert Cantu, chief of neurosurgery at Emerson Hospital in Concord, Mass., and medical director of the National Center for Catastrophic Sports Injury Research at the University of North Carolina at Chapel Hill, says new rules put in place in 1976 to discourage headfirst contact in football—known as “spearing”—aren’t consistently followed.

The number of reported cervical-spine injuries that lead to permanent or temporary neurological damage, such as partial or complete paralysis, remains small but appears to be on the rise. The center’s Annual Survey of Catastrophic Football Injuries in high school and college last year found that in four of the previous 10 years, the number of such injuries that led to some paralysis was in the double digits—14 in 2008, for example—after dropping into the single digits throughout the 1990s. Many severe spinal-cord injuries in sports also go unreported, Dr. Cantu says.

Coaches who were surveyed told the researchers that they teach players to tackle with the head up, but many players still lower their heads before making contact and many ball carriers are injured with their heads down.

“There is a sense of invulnerability in young athletes who think it’s not going to happen to them,” says Ron Courson, director of sports medicine at the University of Georgia. In addition to training players on proper blocking and tackling techniques, his team practices injury response scenarios on the field with trainers, physicians and emergency responders before football season begins.

At Penn-Trafford High School in Harrison City, Pa., there are three athletic trainers on staff for the 1,600 athletes in grades 9 to 12, says Larry Cooper, head athletic trainer. Parents can attend classes for coaches about injury risks and a sports emergency action plan is available on the school’s website.

While college athletic programs nearly always have athletic trainers on staff, the National Athletic Trainers’ Association says only two-thirds of U.S. secondary schools with athletic programs have access to full- or part-time athletic trainers, who are typically licensed by the state and work under the direction of physicians. That’s up from 40% to 45% in 2005, but leaves a third of schools without one, the nonprofit association says. The group is conducting a state-by-state ranking of public schools and a similar study on private schools to determine why schools don’t have trainers. (Expense is one factor.) The group also is analyzing the medical care available at games when an athletic trainer isn’t present.

“Parents who would never leave their kids off at a public swimming pool without a lifeguard think nothing about dropping them off at football or soccer without an athletic trainer. But they need to ask who is taking care of their kids when they are participating in these sports,” says Jim Thornton, president of the athletic trainer association and director of sports medicine and athletic training at Clarion University in Clarion, Pa.

The association issued recommendations for management of cervical-spine injuries in athletes in 2009 which include special care in removing a helmet, face mask and shoulder pads and immobilization techniques on the field. Erik Swartz, an athletic trainer and associate professor at the University of New Hampshire who co-wrote the recommendations, says one of the highest risks in a spine injury is moving an athlete.

Tommy Mallon, now 22, collided with another player during a lacrosse game in 2009 at Santa Fe Christian high school in Solana Beach, Calif. A teammate ran to his side but fortunately didn’t attempt to help him up until athletic trainer Riki Kirchhoff got to the scene. She kept Mr. Mallon on the ground until emergency medical responders arrived.

At the hospital, he was diagnosed with a fracture in his spine at the C1 vertebra and a damaged artery restricting blood flow to the brain. After months of grueling rehabilitation, including traction in a massive “halo” device to immobilize his head and neck and physical therapy, he was able to start classes at the University of San Diego in the spring of 2010. Though he won’t be able to play contact sports again, he sustained no permanent neurological damage.

Mr. Mallon and his mother, Beth Mallon, a photographer who was at the game when his injury occurred, formed a nonprofit group, Advocates for Injured Athletes, to help other families navigate the challenges of injuries and lobby for certified athletic trainers at every high school.

Last year the Mallons also launched Athletes Saving Athletes, a program which offers classes taught by athletic trainers to help student-athletes understand signs and symptoms of different types of sports injuries and conditions. About 1,500 athletes in the San Diego area have participated and Ms. Mallon aims to expand the program. “We can educate athletes to recognize basic symptoms, and if they suspect a neck injury, don’t move them. Don’t touch them. Just stay with them until help arrives,” she says.

Tucker Boucher, 16-year-old junior at Cathedral Catholic High School in San Diego, says after going through the program, he talked to his lacrosse team about risks and how to recognize symptoms of injury. His mother, Annie Boucher, who also attended a session, says the training “empowers these kids with knowledge of certain situations that can save somebody’s life.”

After Spinal Cord Injuries, Can Men Still Have Children? – Dr....