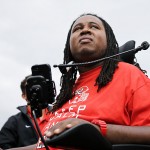 PISCATAWAY, N.J. (AP) — Moments after becoming the first player in the 144-year history of Rutgers football to have his jersey retired, Eric LeGrand told a loving crowd that his beliefs haven’t changed in the three years since he was paralyzed in a game against Army.

He will walk again.

In a passionate halftime plea to the crowd shortly after the No. 52 jersey was unveiled on the upper level box at High Point Solutions Stadium where the game is filmed, LeGrand asked them to support research to final a cure for paralysis, a cause he has joined by forming “Team LeGrand.”

“Help me get back on my feet and walk again,” LeGrand said. “Always remember each and every day – believe! It’s in me and it’s in you guys, too.”

Current coach Kyle Flood presided at the start of the ceremony and presented the 23-year-old a sword with the word “believe” inscribed on it.

“A family sticks together and a family stays together and there has been no more important person in our program than Eric,” Flood said before heading back to the locker room to address his team after the opening half against Eastern Michigan.

LeGrand had been greeted with a standing ovation from the crowd – many wearing No. 52 jerseys or T-shirts handed out before he game – as his motorized wheelchair took him from a tunnel near the end zone to midfield. Most fans never sat down during the roughly 10-minute ceremony which was interrupted several times by sustained applause.

“Keep living the way you are,” Schiano said. “You are inspiring all of us.”

“Can’t wait to see the day you walk on the field again,” Westerman said.

LeGrand was paralyzed from the neck down making a tackle covering a kickoff in a game against Army at the Meadowlands. Cadets coach Rich Ellerson was among those wishing LeGrand well.

LeGrand was upbeat in a news conference after the ceremony.

“Wow. That was truly incredible,” said LeGrand, who stopped to take a picture with former teammates before his news conference. “That’s all I can say. I’m going to remember that the rest of my life. I want to thank Rutgers for all they’ve done for me. This is going to go down in history. We all made history here today. I’m so happy I finally got to announce Team LeGrand. We’re so close to a cure. All we need is the money.”

Since being hurt, LeGrand has served as a motivational speaker who many times meets with people who are paralyzed. He also works on the radio broadcast crew for home football games. He is still working toward his degree. He goes to rehabilitation every day, “working his butt off” in his effort to walk again.

“I have my doubters out there,” LeGrand said. “They say, `You’ll never walk again, you’re not a hero. You deserve to be where you are because you were trying to hurt the guy you were tackling.’ It doesn’t bother me. For every one of those, there are a 100 that are behind me.

“I’m hearing a lot of great things,” he added. “The doctors are talking about stem cells regenerating the spinal cord. I’m not going to speak for all the scientists, but I’m hearing great things and they all say what they need is the money for the research.”

LeGrand said seeing his teammates and old coaches during the ceremony brought tears to his eyes.

“There are 1.5 million people who are paralyzed with some sort of injury,” LeGrand added. “People don’t know about them, I’m their voice. I see people working hard every day who don’t have the notoriety. People are wishing to be in my situation, which is hard to believe, because of my notoriety.”