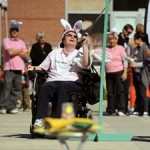 WATERLOO — Suddenly Jesse Redden needed a wheelchair and help with just about everything after a car crash damaged his spine, paralyzing him from the neck down.

“It was emotionally stressful,” said Redden, 24. “I was always an extremely active person, very independent.”

He was surprised to experience just how tough it is to get around in a wheelchair as he encountered endless obstacles, even in facilities supposedly designed for wheelchair use.

“The world is not as accessible as people think,” said the Fergus man.

Helping people understand the daily challenges faced by people who need a wheelchair or have physical limitations is the goal of the annual Wheelchair Relay Challenge hosted by Spinal Cord Injury Ontario. This year’s event was held in Waterloo Town Square on Saturday morning, with 10 teams of five people each with and without disabilities tackling an obstacle course and racing in wheelchairs.

People who join the event often tell her afterward it was tougher than they thought getting around in the wheelchair, and they were sore the next day.

“And they were only in it for five minutes,” Daniel said.

That’s just a glimpse of what people with physical disabilities face every day.

“They have to manoeuvre through our cities in their wheelchairs,” Daniel said. “They have no choice, so they have to overcome the obstacles we trying to highlight here today.”

She spent the past month promoting the event by attending events in a wheelchair, soon realizing how physical barriers can make a person in a wheelchair feel left out and how they’re treated differently.

“That gave me real insight,” Daniel said. “It was a very interesting experience and very eye-opening. And that’s what we hope to bring to individuals today.”

At least one person in Ontario suffers a spinal cord injury every day. Money raised at wheelchair relay challenges held in cities across the province this month and next goes to services that support people with spinal cord injuries.

The local event raised $24,000 last year. The total for this year — the seventh — is estimated at $15,000. Daniel said local support from volunteers, sponsors and participants remained strong, but some provincial and regional sponsors scaled back.

Redden really appreciated the support he got from Spinal Cord Injury Ontario after his car crash in June 2011. Exhausted from long days working construction, he blacked out behind the wheel and his car went off the road and rolled a few times.

When he woke up in hospital, he was told he’d never walk again.

“I just kept saying no. Denying it pretty much,” Redden said.

But then he started to feel some movement and after months in hospital, he went to a rehabilitation facility to strengthen his arms and legs. First he could stand for short periods, then slowly began to walk again.

“Now it’s getting to the point it’s very, very rare I use my chair,” Redden said.

A cane helps with his balance and a brace bolsters his weaker left leg. Since he’s not back to work, he decided to volunteer with the organization’s peer support program to be there for other young people who suffer a spinal cord injury knowing firsthand it’s a difficult experience to face.

Continued support he’s getting from the organization is helping him to move on.

“They’re just trying to show me how I can live a full life with the ability I have.”