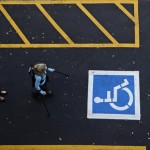 Locomotor therapies re-create and repeat the pattern of walking to train the spinal cord in functions formerly controlled by the brain.

Locomotor therapies re-create and repeat the pattern of walking to train the spinal cord in functions formerly controlled from the brain. More than 600 patients have trained in the system, with a wide spectrum of benefits.

It’s a declaration and a question, the first words on the lips of the newly injured after a spinal-cord accident.

“I will walk again.”

“Will I walk again?”

Whether that person will is the gap between hope and proof that has long defined research into recovering from spinal-cord injuries. An emerging treatment known as locomotor is narrowing that gap.

The world of rehabilitation is turning quickly toward locomotor therapies, re-creating and repeating the pattern of walking to train the spinal cord in functions formerly controlled from the brain.

For decades, scientists believed the spinal cord was merely a conduit, or highway, of messages running from the brain to organs, limbs and extremities. Animal research began to show that even some with completely severed spinal cords could be retrained for walking motions.

Many researchers now believe the spinal cord has “central pattern generators” that can initiate movement on their own, not just pass on messages from elsewhere.

The patients and therapists’ job, then, is to program those processors with repeated walking patterns using locomotor training: first by weight-supported steps on a treadmill with trainers touching and moving each joint; then by weight-supported, over-ground walking; then “community ambulation” using a combination of walkers, crutches, canes or robotic aids such as exoskeletons.

Seven national centers, including Craig Hospital in Englewood, are part of an approved NeuroRecovery Network offering the walking therapy in set protocols. More than 600 patients have trained in the system, and each center is teaching more therapists how to spread the concepts into more hospitals and rehab centers.

The Christopher and Dana Reeve Foundation, which oversees the network, says dozens of those patients “are now walking again.” Christopher Reeve, the late actor best known for his title role in the “Superman” films, broke his neck in a 1995 fall from a horse. He was the most visible advocate of producing a “cure” for paralyzed patients, in addition to seeking adaptation.

Patients bound to wheelchairs have for years taken to walkers, while locomotor has allowed others to build the strength to drive vehicles. But the movement-based training brings benefits to paralyzed patients far beyond the goal of walking. 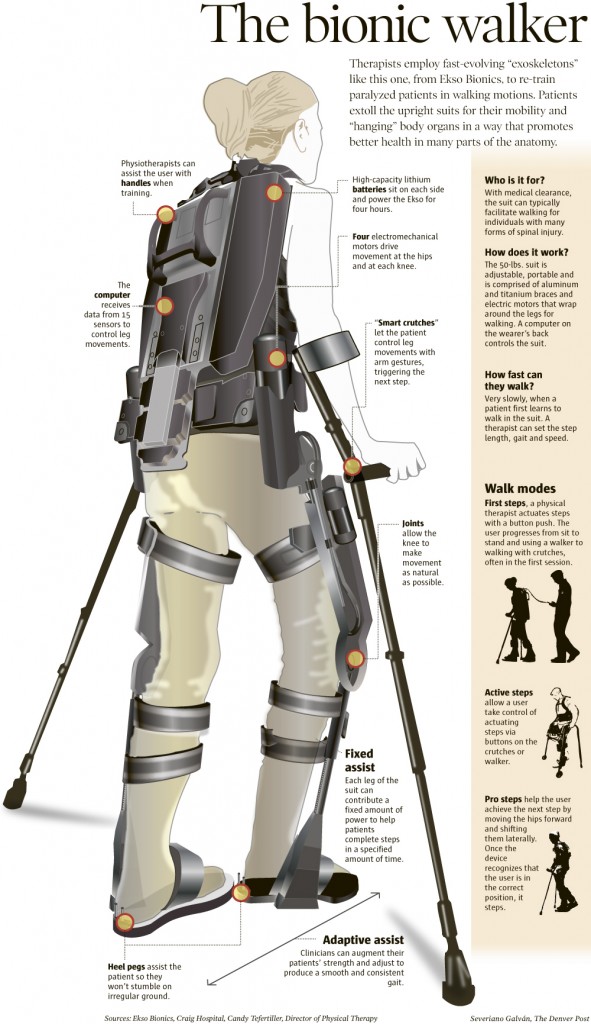 Adults suddenly consigned to a wheelchair by spinal injury or stroke quickly develop illnesses beyond their chronological years: heart disease, diabetes and other debilitating problems. Exercise, even if nerves don’t fully “feel” the movement, reverses much of that damage.

Leg, buttock and arm strength can mean rolling over in bed or shifting in a chair to prevent debilitating and costly pressure sores. Strength and a longer arm reach mean more people feeding or dressing themselves. Regaining fine finger movements can improve work and leisure through use of keyboards, smartphones and driving controls.

“Even those who don’t get movement recovery can offset those huge quality-of-life issues from accelerated aging,” said Dr. John McDonald of Johns Hopkins’ Kennedy Krieger Institute.

You have to try

“Will I walk again?” McDonald quotes his patients’ immediate question. Since he began practicing in 1998, McDonald said, “The answer is quite different: There’s a chance of recovery, and the only thing I can tell you is that the probability of your recovery is 100 percent dependent on your effort. We won’t know unless you try.”

Neuroscientists experimented with some of the principles of locomotor training in animals from the 1990s, but Craig and other hospitals are now pushing it into the mainstream.

Former college baseball star Rob Summers splashed across the media in 2011, walking on a treadmill after four years without “moving a toe.” Summers, who in 2006 was struck in a severe hit-and-run accident that left him paralyzed below the neck, had locomotor training and an electrical stimulator surgically implanted in his spine. The pulses appeared to be the signal Summers needed to successfully walk on a treadmill.

Another boost came in 2012 with a set of scientific papers underlining benefits discovered in many patients. One study found that 87 percent of injured patients showed marked improvement in at least one movement category, such as standing up from a chair, or time needed to walk 50 feet.

Still, there are few completed, control-group studies — the gold standard in scientific research — comparing results of locomotor patients to a similar group randomly assigned to more traditional treatment. And some researchers predict that future patients will be helped most by combinations of treatments: movement, an as-yet-unproven biological injection and adaptive technology.

Wheelchairs are the reality for most current patients, Boninger said, and he would pursue walking therapies “only after I was the best wheelchair user on the planet, so I could get around in the most complex places possible.”

The long-term arc of robot-assisted walking is heartening, but the current reality is sobering, said Dr. Ronald Reeves, a spinal-cord injury specialist at Minnesota’s Mayo Clinic. Robot suits are bulky and expensive; not only can’t they go upstairs, they’re not authorized to tackle a small hill.

“Robotic systems are like the Wright brothers’ version of an airplane,” he said. “We have a long way to go to make them more useful.”

Craig was among the first to show off an exoskeleton two years ago; the hospital is also home to cautious scientists who temper eye-catching marketing with demands for proof.

Designing a random, controlled study that can be meaningful in spinal-cord patients is a challenge, said Dr. Dan Lammertse, Craig’s director of medical research. It requires patients with similar injuries, across dozens of rehabilitation sites, who vary greatly in weight, motivation, quality of therapists and monetary resources.

A steroid called methylprednisolone, which showed promise in early trials years ago, was hailed as a breakthrough. But the results were “discredited and picked apart” by other scientists, Lammertse said.

In another trial, scientists used ganglioside molecules to enhance communication between damaged nerve cells. A well-known athlete claimed success with it, but no patients wanted to be in the control group getting a placebo.

Promising clinical trials do exist. After Lammertse sobers his patients with a description of trials that went wrong, he enthusiastically adds there are more spinal-cord injury trials underway now than at any time in his 30-year career.

Also tempering enthusiasm about movement therapy is the high cost, much of which is borne by patients.

But the quest to walk is leading more patients and researchers to shake off doubts.

“The philosophy has shifted,” said Lammertse, a past president of the American Spinal Injury Association. “This is an exciting time to be in rehabilitation. It’s no longer limited to teaching compensatory skills. It’s ‘both/and.’ ”

Stepping Toward Hope – Part Two Of A Four-part Special Report

“Stepping Toward Hope” chronicles in four parts the efforts of remarkable patients suffering spinal-cord injuries to take advantage of new science and locomotor therapy that may allow them to walk again. Intense struggles, aching despair and remarkable effort are all part of their grueling stories explored by health reporter Michael Booth and photographers Craig Walker, AAron Ontiveroz and R.J. Sangosti.

Here’s a look at each day’s story:

Day 1: James Nall fell down his Arvada stairs and into a world of setbacks and victories far different from his former type-A life as a restaurant manager.

Day 2: Locomotor treatment is helping people with spinal-cord injuries improve their mobility and lifestyles. Amanda Boxtel, directs her own therapy using an exoskeleton for mobility.

Day 3: Mackenzie Gorden strove mightily at Craig Hospital to regain some of her former life as a cheerleader and dancer, but faced new challenges back home in rural Iowa.

Day 4: The future is pouring in now for paralysis patients as robots, computer interfaces and smart controls change lives. But the hard daily work of people like Kyle Pearson and Jo Donlin involves quieter aspirations.