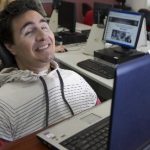 WHILE Shane Agnew has faced his fair share of hurdles since sustaining a spinal cord injury that left him a ventilated quadriplegic, his sights are firmly fixed on the future thanks to his steely resolve and his training at Challenger TAFE.

Seven days after his 20th birthday in February 2005 Shane was injured in an off road motorbike accident.

He was unconscious for the next month as worried family and friends hoped he would pull through,

Shane then spent the next two and a half years in hospital before he was allowed to make the move back home.

Previously he was working in the scaffolding industry and how he is setting his sites on becoming a professional web designer having already developed his own website www.higherthansuperman.com.

His website takes its name from the fact that Shane broke his neck higher than the late Christopher Reeve did, the actor who played Superman.

This amazed his doctors, who rarely see anyone survive that type of injury.

Shane credits his college training and his lecturer Marilyn Ranford to helping him realise his professionals goals.

“I’m really enjoying the course, and everyone at the college has provided great support, particularly Marilyn,” Shane said.

“I had an interest in computers before the accident, but I was always too busy to sit still long enough to develop my skills.”

Marilyn said Shane had a positive effect on other students and that he was an outstanding student irrespective of his Disability.

“Shane has a great presence in class, and is really missed when he’s unable to attend,” she said.

“He serves as a great example to other people with disabilities by showing that they too can have promising futures and rewarding career paths through training at the college.

“By the same token, his commitment is such that he is indeed inspirational to all students, whether disabled or able-bodied.”

He also has a strong support network including mother Sue and fiancée Raquel Tacey.

He wears a special fluorescent patch on his chin that is ‘read’ by a receiver mounted to his laptop, replacing the traditional mouse making his web design truly hands-free.

Shane has started his own business: No Hands Web Design, and is currently looking to set up a website for the Pinjarra Football Club to develop his skills further.