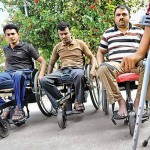 A wheelchair-bound man got a placement, but couldn’t take it up as the workplace wasn’t disabled-friendly.

Meet P Shivashankar Naidu, Anjanappa SN and Shivaraj MV. They wanted to become somebodies in society and support their parents and families but have been confined to wheelchairs. They lost their mobility and sensation in their spinal cords due to injuries, but they still live in the hope of becoming self-reliant.

Shivashankar Naidu passed his PUC, and was dreaming of becoming a police constable and even passed the physical test. He was set to attend the written exam, but his destiny had other ideas.

“I was riding a bike in Kadapa when a speeding lorry hit my bike. My spinal cord was damaged, and my body below my hips became immobile. I lost the opportunity to join the police department, but did not lose hope to become self-reliant,’’ said Naidu. He has completed his training at the Association of People with Disability (APD) and is waiting for the right opportunity to find work.

It is not the lack of job opportunities, but the lack of basic amenities at work places that do not allow Naidu to take up the job.

Anjanappa SN was studying at the PUC level, and wanted to support his parents by taking up a part-time job. Anjanappa was working with a local cable operator, and was dreaming of pursuing higher studies.

“I was working atop of a house to enable a cable connection. I fell down, due to electric shock and received injuries to my spinal cord. As of now, I am doing a one-year diploma course in office management,’’ said Anjanappa.

Shivaraj MV was working as a helper on contract basis with the Hubli Electricity Supply Company (Hescom). Shivaraj was injured when he came into contact with live electric wire.

“The Hescom authorities provided some financial assistance while I was admitted to a hospital. Now, I am undergoing computer training and expect to become self-reliant in the near future,’’ Shivaraj said.

Majority of the people affected with spinal cord injuries are from lower socio-economy classes. Such accidents not only lead to severe physical disability, but also shatters the dreams of individual who becomes helpless.

Speaking with dna, Sha Nigar, senior manager, APD, said most of the hospitals only cater to medical intervention and after that they discharge the patients.

“The physical and psychological trauma begins after discharge. No amount of words can describe the state of a severely shocked and depressed mind captured in a body incapable of very basic functions of survival,’’ said Nigar.

At the community level, there are hardly any organisations who address this complex rehabilitation issue of disability through spinal cord injury.

“In 2003, the APD initiated a rehabilitation programme for people with spinal cord injury. As of now, the APD has the capacity to rehabilitate 350 people suffering from spinal cord injury per year. We intend to extend our services to another 100 people directly and through networking,’’ she said.