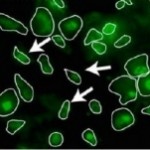 The human immune system can be an overenthusiastic caregiver. In a spinal cord wound, immune cells often aggravate the injury by stirring up inflammation long after it’s needed, which hinders healing. Now a group of Italian researchers demonstrate that, in mice, they can quiet the cells responsible for chronic inflammation around the spinal cord by targeting them directly with drug-laden nanoparticles (ACS Nano 2013, DOI: 10.1021/nn4036014).

When the spinal cord is injured, microglia, the all-purpose immune cells of the nervous system, jump into action. They readily ingest invading foreign substances and dispatch signaling proteins to maintain a vigilant inflammatory response at the injured site. Yet if the microglia don’t move on to repair mode quickly, the inflammation causes problems, such as chronic pain syndrome, which can be much more serious than the injury itself, says Davide Moscatelli, a chemical engineer at the Polytechnic University of Milan.

Moscatelli and his colleagues collaborated with neuroscientist Pietro Veglianese at the Mario Negri Institute for Pharmacological Research to develop ways to target these overactive immune cells. Before the collaboration began, Moscatelli’s group had designed polymer-based nanoparticles that are nontoxic to cells. As the polymers degrade in the cells, the particles unload drugs. The particles are made of a poly(2-hydroxyethyl methacrylate) backbone attached to chains of poly-ε-caprolactone. The chemists add polyethylene glycol units to the ends of the chains to increase the particles’ biocompatibility. While the outside of the particles are hydrophilic, the core is quite hydrophobic, allowing them to encase oily drug molecules. By varying the lengths of the caprolactone chains, the chemists can control how quickly the polymer particles break down so the contents escape chiefly when inside target cells.

Moscatelli and Veglianese knew that activated microglia readily scavenge for foreign invaders, including nanoparticles. Once ingested by the overzealous microglia, Moscatelli’s nanoparticles would finish dispersing their payload of anti-inflammatory drugs.

So after a spate of in vitro testing, the researchers loaded their particles with minocycline—a potent anti-inflammatory drug—along with a fluorescent dye, and injected them into mice with injured spinal cords. They injected the nanoparticles within a hydrogel to keep the particles near the injury site. The team looked at spinal cord cross-sections to monitor where the nanoparticles ended up and checked the injured site for the inflammation factors normally released by activated microglia.

The results were impressive, Moscatelli says. Activated microglia readily took up the injected nanoparticles for two days. After three days from injection, the researchers saw microglia revert to their resting, inactive tree-like shapes. The levels of inflammation factors released by microglia treated with drug-laden nanoparticles were 50% lower than those of untreated microglia, indicating a reduction in the inflammatory response.

The Italian group is now testing to see if the mice injected with nanoparticles recover more quickly than untreated animals. In addition, they hope to use the particles to target other nervous system disorders caused by an overactive immune response, such as multiple sclerosis and Parkinson’s disease.

Microglia are the right targets for hydrophobic drug-delivering nanoparticles, because they readily engulf foreign particles, says Vincent M. Rotello at the University of Massachusetts, Amherst. Many researchers will wish they had thought of doing this experiment, he says. “They built a good hammer,” Rotello says, referring to the nanoparticles, “and they picked the right nail.”