‘Provide us with barrier-free environment’ 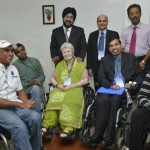 Now, this was not a routine workshop dealing with various aspects of the spine, restricting participation to just the surgeons.

Ten persons with spinal cord injuries, including one from Sri Lanka and two from Malaysia, gave a first-hand experience on how attitudinal barriers impeded mobility of paraplegics (those paralysed waist downward because of spinal cord injury) at the International Workshop on Spine and Spinal Cord Injuries 2013 which began on Friday here.

Cyril Siriwardane from Sri Lanka, who is the executive committee member of Asian Spinal Cord Network, said he was mortified at being held by his limbs to be brought out of an aircraft at the Coimbatore Airport.

Where is the aerobridge, he asked. Lenny S. Ghandi from Malaysia too had a similar experience.

“There is only one aerobridge and it is being used by only one airliner. Why should this happen, asked S. Rajasekaran, Spine Surgeon and director of Ganga Hospital, the venue of the workshop.

Mr. Ghandi pointed out: “Aerobridges must be operated by the airport and not by airliners. Only then, can the facility be extended to passengers of all airliners”.

The participants had one major appeal which was to remove attitudinal barriers that denied such people the quality of life they deserved. Aircraft, airports, trains, buses and public buildings were hardly friendly to them, denying them smooth mobility.

The ordeal that Mr. Siriwardane went through at the airport could have been avoided if policy makers had put in place a system where the airports owned and operated aerobridges instead of the airliners.

Under the existing system, only the airliner that owned the aerobridge used it for its aircraft.

Participants from New Delhi said that only five per cent of the buildings in the national capital were friendly to persons with disabilities. If this is the state of affairs in the capital, one could imagine the situation in the rest of the country, they said.

President of the Consumer Forum of Spinal Cord Society Shivjeet Singh Raghav said smooth access to services would become a reality only if the Rights of Persons with Disabilities Bill, pending in Parliament, is passed into an Act.

“What we need are clear-cut rules and enforcement that can, ultimately, provide for barrier-free environment for us,” he said.

The participants complained that even many hospitals in India did not have enough facilities for persons with disabilities, leave alone the trains, buses and aircraft.

What stood out in each of the participants was the will to live on, overcoming the impact of the injury.

Mr. Ghandi plays tennis from his wheel chair. He is the vice-president of Wheelchair Tennis Malaysia.

S. Rajagopal of Coimbatore said he was rendered paraplegic in a motorcycle accident in September 1979, a few days after he was engaged. But, the wedding was not called off.

A private firm employee then, the injury put him out of it. He runs a number of businesses now, without the injury coming in the way.

“From a wheelchair, we can do many things. Do not underestimate our ability by focusing only on our disability,” says Associate Professor of Zoology at Sri Guru Tegh Bahadur Khalsa College in Delhi Komal Kamra.

“Only our limbs are paralysed, not our minds”, said Chandra from New Delhi.

The message they wanted to give the society was clear- spinal cord injury does not end one’s life. It enables the injured begin afresh. But, it is the unfriendly environment thereafter that disables, not the injury.

Most pros risk injury, not death