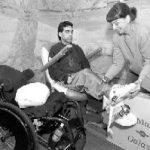 BETHEL — For Cisco Fernandes, the adage that you have to crawl before you can walk is more than just a metaphor for life.

When Fernandes, now 36, broke his neck six years ago in a pool diving accident and became a quadriplegic, he said that one day he would walk.

That possibility seemed unlikely at the time. But now the goal is not as elusive.

Thanks to the generosity of people in the Danbury area, Fernandes and his 37-year-old wife, Jenn, raised $54,000 for experimental surgery and intensive Rehabilitation.

Fernandes had that surgery in Lisbon, Portugal, late last year and spent 2?1?„2 months earlier this year in special rehabilitation at the Spinal Cord Injury Recovery Center in Detroit.

Fernandes is not up and running, but he didn’t expect to be.

“We live in a fast food society where we expect things to happen overnight,” he said. “We have to work hard. We have to help ourselves.”

Fernandes is still in a wheelchair and has limited use of his arms and hands. But he is seeing improvements in his body and working toward the goal of crawling — something he and Jenn saw many people with spinal cord injuries doing at the Detroit rehabilitation center.

At the Walnut Hill Road home where Fernandes and Jenn live with her parents, Fernandes showed some of the improvements he’s made in the past several months.

The tricep in his right arm is strong enough now to keep his forearm in place when he holds it above his head. In the past, the forearm would have simply fallen down and hit his head.

And though the effort is slow and difficult, for the first time since his diving accident Fernandes also can move the fingers of his left hand.

“Each person is different,” said Cheryl Angelelli, director of public relations for the 2-year-old Detroit rehab center. “No two spinal cord injuries are the same.”

But, Angelelli said of the clients at the center, “almost everyone has seen some sort of gain, some more than others.” Among the gains — particularly of those who have had the spinal cord surgery in Portugal — are improved sensation, better balance and muscle control.

“It’s like training to be a pro athlete,” Fernandes said of the work he did in Detroit and the three hours of daily exercise he continues to do. But he admits “it can be so overwhelming.”

Jenn, who is Cisco’s caretaker and constant emotional supporter, says she continues to work with him “because you want to see the payoff.”

That payoff, the couple know, will take time and patience.

They need to get back to Detroit, where Fernandes can use the center’s state-of-the-art specialized equipment.

The cost for the center is $3,000 a month — money that insurance doesn’t cover and the couple can’t afford right now.

Nor did insurance cover the experimental surgery, which ate up $45,000 of the money they got from donations. The surgery at Egas Munoz Hospital in Lisbon was performed by Dr. Carlos Lima, who took stem cells from Fernandes’ nose and put them in his spine to help regenerate spinal cell nerves.

“Lima is amazing,” said Jenn. “He’s not only devoted his life to curing spinal cord injuries, but he’s a very kind person. He still calls Cisco.”

The surgery went well. But Jenn said Lima told her husband to “get to rehab for no less than two years.” Rehabilitation, she said, helps get the nerve cells flowing.

The couple say that for a while in the spring they were discouraged. For all their hard work — Jenn helps Cisco with his rehab and exercises — progress was slow.

Two deaths also saddened them. One was that of Dana Reeve, who fought hard for spinal cord injury victims along with her husband, the late actor Christopher Reeve, who was paralyzed in a horseback riding accident.

The other death was much closer to home. Jenn’s older brother died suddenly in the spring, leaving a wife and young children.

But last month Cisco and Jenn got a big boost. They traveled to Pennsylvania for a three-week Biofeedback program — something that insurance covers.

“It was fascinating,” said Cisco. “They hook up electrodes to the paralyzed parts of your body and you can see the reaction on a monitor, see the signal.”

What Cisco saw was that even where he is paralyzed, the nerves are active. “I found I have nerve signals down my Lumbar,” he said.

That knowledge gives him further incentive to keep up his spirits and his rigorous workouts. Cisco hopes to be able to get a special bike called a MOTOmed to help him with the exercises until he can get back to the Detroit rehab center.

“He’s not walking,” Jenn said about her husband. “But he’s getting ready to crawl.”