Honor the legacy of my father, Christopher Reeve 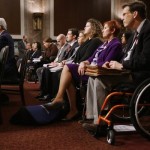 He believed that all people with disabilities should be able to lead healthy and productive lives, no matter where they live.

By Matthew Reeve: My father, actor Christopher Reeve, loved to travel, even after he was paralyzed from a severe spinal cord injury. During trips to places in the United States and abroad, he spoke with many people who, like him, had to find ways to navigate daily life while living with paralysis. These conversations only furthered his resolve that all people with disabilities should be able to lead healthy and productive lives, no matter where they live.

Unlike many living with disabilities, however, my father was fortunate to have had the resources to be able to travel, and he always had access to the highest standard of care. Few are so lucky. Of the 1 billion people with disabilities across the globe, 80% live in developing countries, many of which lack the infrastructure to properly support their needs.

Often, discrimination against the disabled is common practice, in developing and developed nations alike. According to a September report from Human Rights Watch, only about 20% of severely disabled people living in the European Union are employed because of widespread misconceptions about their ability to work. In many countries, disabled children are forced to endure segregation in the classroom, if they can attend classes at all: A UNICEF study found that only 10% of disabled children worldwide go to school. These realities are unacceptable.

One mission of the Christopher & Dana Reeve Foundation is to help people living with paralysis become fully integrated members of society. To this end, our Quality of Life program has worked with the international disability community for years. We’ve supported the health treatment of neglected, paralyzed women in remote areas of Pakistan, provided resources for children with physical disabilities to participate in environmental activities in South Africa and backed a project reintegrating Kenyans with spinal cord injuries into their communities. But there is so much more to do.

The United States has an opportunity to take on a leadership role in the field of disability rights and effect real change on a global level. Recently, the Senate Foreign Relations Committee held two hearings on the Convention on the Rights of Persons with Disabilities, commonly known as the Disability Treaty. This is a required prerequisite before the Senate votes on ratification, likely within the coming months. Based largely on the 1990 Americans with Disabilities Act, the treaty can go a long way toward ensuring that people with disabilities around the world are not discriminated against. Currently, 137 nations have ratified it. Unfortunately, the United States is not one of them.

In December 2012, the treaty missed being ratified in the Senate by five votes. Remarkably, claims that the treaty would affect U.S. policy on abortion and on the home-schooling of our nation’s children led some senators to balk. These claims are pure myth. This treaty has absolutely nothing to do with abortion, and it would not in any way affect the rights of home-schooled children and their parents.

Critics have also suggested that the treaty could threaten U.S. sovereignty, but bipartisan experts have long maintained that this is not the case. Rather, adopting the treaty would expand American influence in regard to disability rights.

Not ratifying the treaty would hinder our nation’s ability to help other countries improve standards of care for persons with disabilities, and it would adversely affect Americans with disabilities who are working, studying and traveling abroad.

We must ensure equal opportunity for as many members of the global disability community as possible, and that can only happen with the participation of our nations’ leaders. It’s crucial that the U.S. take its position at the head of the table, long since established by the Americans with Disabilities Act, and ratify the Disability Treaty. Currently, more than 700 American disability, civil rights, business, veterans and faith-based groups agree, and I’m certain that my father would have too.

By Matthew Reeve
Matthew Reeve is a board member and vice chairman of international development of the Christopher & Dana Reeve Foundation.