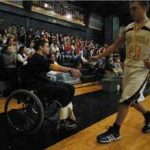 Kiel Eigen remembers the bounce in his step and the butterflies fluttering in his stomach.

He had been waiting for some time for that kickoff. It would be the first of the Old Forge freshmen team’s season. And the first play of his season.

Then, it came. Quickly.

He kicked off, then raced to make a tackle on the Western Wayne returner. He over-pursued and missed the ball carrier completely.

On the next play, he again aggressively attacked a running back from his cornerback position. Determined not to fail, this time he made the hit.

A teammate also came in on the collision. …

Lying motionless on the field, Eigen’s body tingled. It felt, as he said “like his body fell asleep.” He couldn’t move.

The impact fractured his C5 Vertebrae and injured his spinal cord.

Now a 14-year-old eighth grader fighting his greatest battle from a wheelchair, Eigen has inspired an already passionate sports community as Old Forge’s most vocal basketball fan. He sits in the corner of the floor, always decked out in blue and gold, wearing a Blue Devils wristband monogrammed with his No. 2.

As the starting lineup is announced, each player runs to Eigen and gives a high-five.

“That brings a tear to my eyes,” Kiel’s mother Kandi said. “They have been so supportive and it’s genuine. They have really helped him. From the first day, they have just been wonderful.”

Eigen is motivation for the top-ranked Blue Devils.

“I don’t know how or when we decided to do that, the first guy did it and from there it was routine,” Old Forge senior Jim DeStefano said. “At the Riverside game, it was really crowded, they didn’t want him in the corner. I made some arrangements, and he was there.

“We were prepared to go across the gym for him.”

An inspiration to all

Jared Yanniello remembers he was shooting around in the gym when he heard the news that devastated the school district.

As a seventh grader, Eigen had established himself as one of the top point guards in the league while playing on the Old Forge freshman team. He had quick moves. He handled the ball well. He threw precise passes.

“We knew he would be a good player,” Yanniello said. “It’s heartbreaking to hear that a kid with that kind of talent can be in a wheelchair in a matter of seconds.”

Following the injury, Eigen needed to endure surgery to repair and fuse the fractured vertebrae in his neck, never losing his spirit.

“He never dwells on what happened,” Kandi Eigen said. “He was always a child who would concentrate on what could be and he never questioned why.”

Three days after the operation that left Eigen with a long scar on the front of his neck, head basketball coach Al Semenza visited him in his hospital room in Philadelphia. Rarely at a loss for words, the veteran coach didn’t know what he would say to a child dealing with something so devastating.

Once he arrived at Eigen’s bedside, his worry was for naught. Eigen, who was sporting his infectious smile, dominated the conversation with resonating hope.

After the exchange, Semenza knew just what he’d say to his team.

“We told our guys that there are going to be days you aren’t going to want to practice or play,” Semenza said. “You just look at him and that will get you going. Our group is special. They have been together a long time.

“They do push hard, and Kiel is part of the reason for that.”

For everything that Kiel has been through, the Old Forge community has rallied.

There have been several fundraisers from groups in Old Forge and neighboring school districts, including the sale of the wristbands that every player wears on his left arm.

This year’s basketball team is sponsoring the Kiel Eigen “Beyond the Arc” 3-Point Pledge. The Roundball Club donates $5 for every 3-pointer the Blue Devils make this season.

“That’s great, knowing when we knock one down, it raises money for him,” Yanniello said.

At the end of the season’s first half, Old Forge had 94 long-range connections, piling up $470 to help with Eigen’s medical bills.

“I think that is the definition of this community,” Stephen Semenza said. “We will do anything for him. We will always gather around him.”

Nevertheless, at each practice, as coach Semenza’s voice echoes throughout the gym, and the players begin to tire, they push harder than they ever have before.

There is no reason or time to feel sorry for themselves.

“We work hard because we are reminded that when we are loafing, Kiel Eigen is in therapy,” Yanniello said.

During the games, with every basket, every steal, every big play, Eigen cheers as loudly as he can. He can’t raise to his feet, but he celebrates with a smile.

“These guys are really great,” Eigen said. “They are the best.”

And the Blue Devils fight for every minute just to make sure their biggest fan enjoys his biggest thrill.

“You look at Kiel, and if that isn’t enough to motivate you, you aren’t a player,” DeStefano said. “Seeing him like that is tough. When he’s looking back and smiling at us, it means a lot.”

After the final buzzer, just as they did before the game, players shake hands with Eigen.

Fans, sometimes strangers, come up to see how he’s progressing. His immobilizing collar has been removed and he can move his hands.

There is also some feeling returning to his legs. All are small steps in the long road to recovery.

“He’s getting better all the time,” his father Keith said. “He’s got an incredible attitude. We are really proud of him.”

Where Eigen once dreamed of stardom for the Blue Devils, he dreams now of walking again, rehabilitating five days a week.

And, because football is out of the question, he’s determined to someday play basketball again.

In the meantime, he’ll continue to be the inspiration of a very determined team.

“He is going up to Allied every day, just to try and walk,” Stephen Semenza said. “That’s what drives us.

“We are the happiest guys in the locker room, because he’s happy.”

Facebook
Twitter
Email
Mix
Digg
Previous articleYear after paralyzing injury, player strides back to Cornell
Next articleSurvey of Pain and Fatigue in Adults with Disabilities

Battle of the bands to help paralyzed Kaukauna teen