‘Stem cells’ created in less than 30 minutes in ‘groundbreaking’ discovery 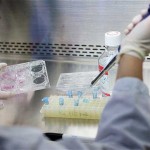 Scientists have turned adult cells back to their embryonic form in under 30 minutes by simply treating them with acid in a breakthough which could revolutionise personalised medicine.

The era where organs and tissues can be re-grown is a step closer after scientists found treating adult cells with acid takes them back to an embryonic state in under 30 minutes.
Experts in the field of stem cells have hailed the research as groundbreaking and say, if replicated in humans, it would herald a new ‘age of personalised medicine.’

Turning cells back to an embryonic – also known as pluripotent – state means they can then be turned into any other type of cell in the body.

Previously that could only be achieved through genetic manipulation which was time consuming and costly.

But scientists at the Riken Centre for Developmental Biology in Kobe, Japan, found that cells taken from newborn mice effectively ‘lose their identity’ within 30 minutes of being exposed to mildly acidic conditions.

Professor Austin Smith of Cambridge University, writing in the Journal Nature said the new cells could be seen as a ‘blank slate’ from which any cell could emerge depending on its environment.

“Remarkably, instead of triggering cell death or tumour growth as might be expected, a new cell state emerges that exhibits and unprecedented potential for differentiation into every possible cell type,” he said.

The discovery has been hailed as ‘incredible’ by scientists who believe it will speed up the advancement of personalised medicine.

They could be used to regenerate organs, stimulate the growth of new blood vessels, or create skin grafts.

“(This) approach in the mouse is the most simple, lowest cost and quickest method to generate pluripotent cells from mature cells,” said Professor Chris Mason, Chair of Regenerative Medicine Bioprocessing, at University College London.

“If it works in man, this could be the game changer that ultimately makes a wide range of cell therapies available using the patient’s own cells as starting material – the age of personalised medicine would have finally arrived.

“Who would have thought that to reprogram adult cells to an embryonic stem cell-like (pluripotent) state just required a small amount of acid for less than half an hour – an incredible discovery.”

“The papers describe a major scientific discovery and they will be opening a new era in stem cell biology,” said Dr llic.

“Whether human cells would respond in a similar way to comparable environmental clues, it stills remains to be shown. I am sure that the group is working on this and I would not be surprised if they succeed even within this calendar year.

“The approach is indeed revolutionary. It will make fundamental change in a way how scientists perceive the interplay of environment and genome.”

Prof Fiona Watt, Director of the Centre for Stem Cells and Regenerative Medicine, Kings College London, also said it was a ‘remarkable finding.’

The studies were published in the Journal Nature.

WILL YOU STAND UP FOR THOSE WHO CAN’T?