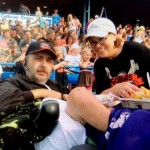 Most love stories don’t begin with an accident that leaves one of the lovers paralyzed from the neck down. This one does. And against all odds, it ends with a happily ever after.

Our story gets under way in the summer of 1996, as Cliff Copeland stood beside a car, talking with the driver. The two were “having words,” when the driver unexpectedly hit the gas. In a twist of fate so bizarre it would be difficult to duplicate intentionally, Cliff’s toe snagged beneath the treads of the car’s rear tire.

He tried to pull free, but as the vehicle sped away, Cliff was lifted sideways and twisted, irrevocably damaging the C5 and C6 vertebrae of his spine. From that moment on, he would never again be able to use his legs.

Cliff was rushed to a hospital, near his Westland home. At the time, he could still move his arms and hands. The hospital was a small, however, a community medical center not really equipped to deal with serious spinal cord injuries. They were busy, understaffed. Cliff lay on a gurney in one the hospital’s hallways for 10 hours, waiting for someone in charge to decide the best course of action.

During that time, the swelling in his spine continued untreated and over the course of those 10 hours, he mostly lost the use of his arms and hands as well.

Eventually, Cliff wound up in a Detroit rehab center, where he spent a year learning to exist in his new reality. As it turned out, in addition to the spinal injuries, Cliff had also sustained a fairly serious closed head injury, which would continue to give him trouble through the present.

Following rehab, Cliff tried his hand at independent living, but because of the closed head injury, he sometimes became confused and frustrated and would make “poor decisions,” as he calls them.

Eventually, he ended up in a semi-independent living facility, a group home where caregivers were available to assist in his daily routine.

Through it all, Cliff managed to keep a positive attitude, though one can only imagine he knew his share of dark moments, as well. Though the group home was by no means the life Cliff had envisioned for himself (before the accident he was a successful plumber) he was determined to make the best of it.

It was while living in the group home that Cliff met Denise Chambers. Chambers had recently returned to Michigan from California and was working indirectly for General Motors as a litigation specialist. Her job, in essence, was to make sure insurance claimants weren’t trying to scam the insurance company.

Though she says she worked for a company that was more likely than most to grant claims to those who deserved them, part of her job also consisted of telling people “no.” It could be stressful, she admits, and took an emotional toll.

“I suddenly found myself motivated to do something outside myself,” Denise explains. “My daughter was going to the University of Michigan and we both wanted something positive to do. She found an ad in the paper for caregivers needed. The money wasn’t much, hardly anything compared to what I was making; it was more like volunteer work for me.

“Also, I was starting to get lonely, going home to an empty house every night. I was used to having family around. This seemed like the perfect thing for me.”

It wasn’t love at first sight, the moment Denise met Cliff, but there was definitely something there. Denise, who had gone through a rough divorce in California before moving back to Michigan, admits she was feeling sorry for herself, focusing on the bad cards life had so recently dealt her.

Into that life came Cliff, a big guy with an outsized personality to match. Sure, he was mostly paralyzed from the neck down, but you’d never know it from his attitude.

Cliff had just returned to the assisted living facility from yet another series of surgeries when Denise began working there. She was more than impressed with his lack of self-pity.

“I thought, how could he have all four limbs paralyzed and not complain about it?” Denise says. “He was just like a normal person; he never complained. I started asking myself questions from the perspective of a claims examiner. I asked myself if he could deal with this, whey couldn’t I deal with my problems? This was what life gave me. I could either complain or deal with it and live my life.”

Denise was fascinated by Cliff’s ability to struggle through each day without focusing on the negative. She began spending as much time as possible with him, just to share in a measure of his personal strength.

“I thought, ‘This guy is going to teach me how to live my life better,’” Denise says.

Even then, Denise could feel a bond forming between them.

But it wasn’t until the 50th anniversary of Cliff’s grandparents in Tawas City that the two had a chance to really get to know each other. Cliff couldn’t make the trip upstate without a caregiver.

“He asked me to go with him,” Denise says. “I was surprised he asked me, but I wanted to see what his family was like. I was curious. His grandfather is full-blooded Chippewa, and knowing Cliff, I figured they had to be pretty interesting. They were.”

Through speaking with Cliff’s grandfather, Denise began to understand the upbringing that had given Cliff his ability to deal with adversity.

“He had a lot of interesting stories about Cliff’s life,” Denise says. “His grandfather had had to prove he was a proud American. He was strong willed and I could see how that trait had passed down the generations to Cliff.

“Cliff is the type to pick up the ball and run with it. He didn’t let it stop him at all.”

Denise also couldn’t help but notice Cliff’s family’s attitude: they didn’t treat him any different — better or worse — than any other family member. His disability was taken in stride not only by Cliff, but by the rest of the family as well.

“I just got to stand back and watch this man with this disability who was really kind of a hero,” Denise says. “I thought, ‘This is a person I want to surround my life with. He could make me a better person.’”

After years of working as a claims examiner, Denise was getting her first real lesson in life on the other side of the aisle. She understood more fully what impact her decisions had on the lives of claimants. All of these revelations, she says, only served to draw her closer to Cliff.

Back at the assisted living facility, the two began to date, though that word took on new connotations because of Cliff’s condition. Every outing became an adventure, rife with possibilities for mishap. Everything from lack of handicap access to problems with the lift that places Cliff’s wheelchair in a specially equipped van offered opportunities for trouble.

On at least two occasions, Denise accidentally locked Cliff, along with the car keys, inside the van.

“Oh, yeah,” Cliff recalls with a laugh. “She locked me in there and was panicking and crying. I finally got myself out with a coat hanger.”

Maybe it’s no surprise that, for their first date, Cliff insisted on doing the driving.

“I was going to the store in my wheelchair,” Cliff says. “And she sat on my lap and I cruised her up to the store with me.”

At first, Denise’s daughter, Jacklyn Adams, was slow to understand the love her mother felt for a quadriplegic man. That trepidation soon faded though; anyone who’s met Cliff quickly comes to understand he is far more than his disability.

After five years together, Denise and Cliff walked down the aisle; she walked, he rolled. By now the two were so used to the situation that it seemed, and indeed was, the most natural thing in the world.

Denise admits that even after five years together, she was nervous about the wedding. She had no concerns about living with Cliff’s so-called disabilities, but rather with the health risks that sometimes accompany them.

No amount of personal strength, courage or positive thinking can change the hard fact that a quadriplegic person’s health is often a perilous thing. On several occasions, in fact, Cliff has been so close to death that doctors have asked Denise to sign a “do no resuscitate” form.

Unnoticed tears fill her eyes when she speaks of the tenuous reality that surrounds their marriage, their lives.

“One day we may be at Disneyland and the next day in ER. That’s just how it is.”

But for now, Denise draws her strength from the man she loves and shoulders on, day by day. Cliff, in turn, continues to think he’s the lucky one in the relationship, a man blessed with the love of a good woman who thinks he shines like the moon and stars.

If that’s not happily ever after, what is?

Scientist’s discovery of role of Aquaporin in spinal injuries recognized with...