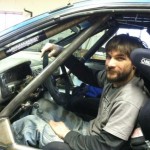 Rally car racing is popular in Europe and Canada, but it has a much lower profile in the United States. It is a dangerous sports in which racers thrash through rural, gravel roads at high speeds in street-legal cars as they try to score the fastest time.

Chris Hrabik, from Sedgewickville, will compete in a nationally-sponsored rally this week in Salem, Missouri. And here’s the twist – he’s a quadriplegic.

Chris Hrabik can usually be found leaning over a huge sheets of metal, making precision cuts with a plasma cutter. In the corner of his nearly completed shop sit a half-dozen five-foot tall metal sunflowers.

“That’s what started the whole business was one of the big sunflowers,” Hrabik said. “I made one for my sister’s wedding just to one up everybody else with presents. That’s really all it was. And then the neighbor saw me build it. I built one for them. Two years later, now that’s where I’m at.”

So he started this business, Apple Creek Metal Works, in a garage in rural Sedgewickville.

Most of his work is custom-made. He does all the work himself in his shop from his wheelchair with his one good arm.

Hrabik has been in a wheelchair since he was 18 years old, when an automobile accident on a country road broke his neck. Before he was hurt, he worked in construction as a concrete finisher. His metalwork skills, he says are all self-taught.

“I was really lucky. See, I’m a neck injury. I broke my C5 and 6 vertebrae, which normally means you don’t have any hand grip,” Hrabik said. “Luckily, I had my right hand come back. My left hand I can’t use at all. I couldn’t even pick up a zip tie with it. So sometimes I’ve duct taped my hand to pliers and or whatever I need to do. I do hillbilly modifications. There’s a way to do everything if you just do it. If it’s got to be duct tape or bungee cords or whatever, it all works.”

Hrabik does most of his work leaning over, and he creatively modifies his tools. He saws off the legs of some tools so they are at his height. He encased a vicegrip in a cylindrical piece of concrete. That way, he can roll it across the floor of his shop without having to pick it up.

But Chris’ story is not about metal working. His story is about rally car racing. He does all this — building a garage, starting a business, creating metal artwork — to indulge his passion in rally car.

“It combined everything I liked. It was outdoors, off-road, you were sliding around corners. It’s like high school county road cruising, but legal. And a lot faster,” Hrabik said.

Rally car racing is not the most popular sport in the United States. Racers rip through public streets in street legal cars to see who can score the fastest time. It’s often on gravel country roads, and drivers don’t know the route until the day of the race. A co-driver has maps and directions to guide the driver.

There is one this weekend in Salem, Missouri called the Rally in the 100 Acre Wood. Chris will be there, competing in his 1997 Subaru Impreza.

He bought the car for 700 bucks, then rebuilt most of it himself and rigged it up with hand controls so he can drive it without the use of his legs. He’s poured $11,000 into his ride.

“There’s a lot of guys in wheelchairs doing drag racing, but it’s go real fast in a straight line. This is go real fast on roads you’ve never seen, on conditions that change. A guy in front of you can tear up a rock and throw it on the road and you have no idea it’s even there. That can make or break a rally. You can total your car right then, and nobody gets penalized for it. That’s just what it is,” Hrabik said.

Chris is aware of the irony at play here. He broke his neck in a vehicle that was sliding around on a gravel road, and now that is precisely what he wants to do for fun. In some ways, he’s confronting his fears.

“A part of me wants to get over the fear. Because I still get nervous,” he said. “The accident runs over in my head on a daily basis and when I’m out there sliding around on gravel roads, you think about it.”

Hrabik was teaching his girlfriend at the time how to drive a stick shift. She did not want to drive on highways, so they were driving on a county road. On the very last corner of that road, right before they got to the highway, she got a little loose on the corner, lost control and rolled the truck.

“I got injured on July 13, 2004. So I picked 713 as my number,” Hrabik said, pointing to the digits on his race car’s door. “Everybody just looks at it as a car number. And that’s one reason why I wanted to start racing is because there’s no handicapped plate. There’s no handicapped tag. I’m just a normal competitor trying to beat somebody else. We’re all the same when we’re racing. Nobody looks at me different.”

“Kind of wish I didn’t. Somethings you don’t want to remember,” Hrabik said.

He spent two and a half months in a hospital. Speakers came and went, trying to motivate and encourage Hrabik and other patients. But Hrabik thought they were depressing.

“I was an 18 year old kid right out of high school, pretty much,” he said. “I didn’t want to hear about routines and driving minivans and all this stuff. You know, nobody came in with anything exciting that I felt that I would like.”

So Hrabik decided he wanted to become the guy he wished came to speak with him at the hospital. Now, he takes his race car to hospitals to talk to recently paralyzed patients, take them outside, and tell their lives are not over.

“Don’t listen to these people that say you’re going to end up working on computers because that was always the biggest career option they always gave me was to do computer work,” Hrabik said. “I did construction. That’s what I love to do. I loved running heavy equipment and building houses. Nobody told me I could be a welder or a fabricator or drive race cars.”

Hrabik has other hobbies, too. He loves to fish, and now he’s taken up skydiving, scuba diving and kayaking. He took up these things after his injury, just like rally car racing.

“I don’t like cliches. I don’t like ‘If there’s a will, there’s a way,’ because sometimes there is no way. No matter how much will you have, certain things you can’t do. I just tell people just figure it out. Just do it. If it works it works, if it doesn’t it doesn’t. You know, I fail all the time. So? You know, just do it better the next time,” Hrabik said.

Chris Hrabik will compete in the Rally in the 100 Acre Wood near Salem, Missouri on February 21 and 22. Look for number 713.