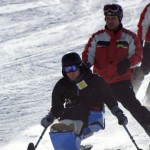 THE BLUE MOUNTAINS — Derek Moseychuk has found a new sense of freedom.

The Brampton man hit the slopes of the Craigleith Ski Club for the first time in more than a year on Thursday, with the steady hands of Steve Jones right behind him.

Moseychuk snowboarded on a regular basis at Blue Mountain, until a car crash in December, 2012, rendered him quadriplegic.

“I wanted to try something fun,” said Moseychuk, as Jones and another volunteer made sure he was properly strapped into a sit-ski.

“He’s a glutton for speed,” joked Jones, the president of the Ontario Track 3 Ski Association. “He’s adventurous and not afraid.”

Moseychuk was also quickly progressing through the lessons, noted Jones.

Moseychuk was just one of about 190 people with spinal cord injuries who took part in the 14th annual event organized by Spinal Cord Injury Ontario; for many, it was a first time in a sit-ski.

The day including fun ski and snowboard races, sit-ski instruction, complimentary ski and snowboard lessons, as well as a reception. Funds raised through the event goes to support people with spinal cord injuries.

The event has raised about $850,000 for the organization over the 14 years, noted Spinal Cord Injury Ontario spokesperson Gillian Lynne-Davies.

“You can really see the work of our organization in action,” said Lynne-Davies, as she and Spinal Cord Injury Ontario chief executive officer Bill Adair watched Moseychuk make his way down the hill with a couple of volunteers with Ontario Track 3 right behind.

“This is an opportunity opener,” said Adair. “They realize that it’s not just this they can do — they can go sailing or horseback riding, or bowling with family.

“This is a doorway into rebuilding a satisfying life, a return to sports and family recreational activities that they probably didn’t think they’d be able to get back to.”

There are approximately 33,000 people in Ontario with spinal cord injuries; Adair said about 600 people a year get added to that list, either through disease or injury.

Adrienne Walpert used the experience last year to reclaim an important part of her life she thought she lost after her spinal cord injury.

“I used to ski before I broke my back,” said Walpert, who used to race giant slalom in high school. “It was really great to get back on the slopes again. It was definitely different being in a sit-ski, but it wasn’t as hard as I thought.”

Alex Hunter of Severn Bridge fell at work last summer, and now has paraplegia. Thursday was the first time he’d been on skis since last winter.

“I was really missing it,” said Hunter. “But the help has been great, and I’ve even been able to ski by myself.

“It was pretty good.”

Moseychuk acknowledged being back on the hill gave him the sense of freedom.

“It was a little scary, but it was fun, exciting,” he said. “I was getting sick and tired of watching everyone else ski.”