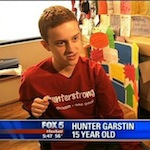 ATLANTA, Ga. – Hunter Garstin is young, soft-spoken and fiercely determined to come back from a devastating spinal cord injury. He was badly hurt during a high school wrestling match in December. However, Garstin is determined his story will not end in a wheelchair.

The Tennessee teenager and his family have gained a huge following on Facebook, Twitter and Instagram. They’re hundreds of miles from home at Shepherd Center, but they’re far from alone.

Peek into Hunter Garstin’s room at Shepherd Center, and it’s pretty clear the 9th grader has a few friends back home in Franklin, Tennessee. His walls are plastered with hundreds of homemade cards, and posters and photographs.

Looking around him, Garstin says “It’s what motivates me, and drives me. There’s not a single school that hasn’t heard about the accident, they’ve all just been so supportive.”

Hunter, who is 15, has needed that that support as he struggles to come back from wrestling injury no one expected. He was in Huntsville, Alabama, December 7th, 2013, wrestling for Independence High School, when he lost his footing, and fell backwards on the mat. That caused his head upper body to bend forward. Hunter’s mother Emily Garstin says, “The other guy came down on his neck, just in an awkward position, something that was just a freak accident. That doesn’t really happen in wrestling.”

Hunter dislocated the C-6 disc in his neck, his mom Emily says his spinal cord injury was classified as an “ASIA A,” meaning, his mother explains, “He couldn’t feel anything below C6 in his neck. He didn’t have any feeling, no movement.”

A few days after emergency surgery, Hunter was transferred to Shepherd Center in Atlanta. He was in bad shape, he says, so nauseous, he couldn’t sit up straight. His arms and legs wouldn’t move. Hunter says, “That’s when it really started hitting me, hey, this is something really serious, and this is your life here.”

And. that’s when something clicked, and Hunter realized what he had to do, “So, ever since then, I’ve just been, just workout after workout, doing whatever I can. And this place has really been amazing.”

From early morning to late afternoon, Hunter pushes himself. Clinging to the smallest signs of progress. Being able to feel his fingers. Moving his middle toe. He has regained sensation in most of his body, now he’s working on regaining control of his arms and legs. He says, “I can’t just, you know, stop and quit. Because this is the rest of my life. And I don’t want to, I refuse to be stuck in this wheelchair.”

Back home at Independence High, Hunter’s school has rallied behind him. Students created the hashtag #hunterstrong.

At a local elementary school, kids too young for Twitter or Instagram videotaped themselves cheering for him.

And then, there’s the mail. Emily says, “People from our community. People from all over the world, he gets letters from Australia, Spain and England.”

Recently Hunter’s favorite VIP – Dix – his dog came to visit. That got him thinking about home. He says, “Sometimes I feel like I’m missing out on freshman year. And you, know it really kills me, that I have to stay up here.”

But Hunter Garstin pushes on. Knowing he’s got this. He’s #hunterstrong.

If you’d like to see more photos or read more about Hunter Garstin’s journey, visit his Facebook page, “Prayers for Hunter Garstin“.