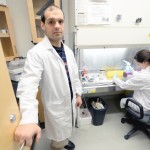 Twenty-eight years after first meeting Hansen, Buttigieg is a biology professor at the University of Regina. Recently he received a $100,000 grant over two years from the Saskatchewan Health Research Foundation (SHRF) to improve the lives of people with spinal cord injuries.

One day Buttigieg hopes he’s able to heal his hero.

He vividly recalls hearing Hansen speak at his elementary school in Toronto and talking with him afterwards.

“I was really curious about how being in a car accident can result in a spinal cord injury or not being able to walk — I just couldn’t fathom that,” Buttigieg said.

During his first year at McMaster University in Hamilton, Buttigieg again crossed paths with Hansen when he spoke at the university during a ceremony where he received an honorary doctorate.

Further inspired, Buttigieg became a volunteer research student in a spinal cord injury lab at McMaster before pursuing graduate studies there. He went on to work with a prominent neurosurgeon specializing in spinal cord injuries before arriving at the U of R in 2011 and starting his research program.

One of the focuses of Buttigieg’s research is stem cell regeneration for spinal cord injuries, stroke and multiple sclerosis.

“In terms of the damage to the nervous system, it’s very similar between the three cases,” he said.

When a spinal cord is healthy, a signal is sent from the brain to the nerve, and then the nerve is turned off.

In spinal cord injuries, the nerve is crushed, which hampers its ability to turn off. When the nerve is on all the time it burns out and causes a loss of communication between the brain and the rest of the body.

The SHRF grant Buttigieg received allows him to research how to limit the hyperactivity of the nerves to prevent them from burning out and fix the burned out neurons.

Buttigieg has found a special class of protein that works as an emergency brake.

“What’s supposed to happen is when a signal goes from the brain to the feet this protein basically turns off the neurons and then it’s fine. But when it’s crushed, it’s stuck in the ‘on’ position,” Buttigieg said. “I’ve found that there is a specific drug that we can administer that can turn that protein back off again, so turn off those neurons.”

By reducing the neurons that burn out, the severity of the spinal cord injury can be limited and in some cases paralysis can be reversed.

“The other neat thing about this protein is that it does act as an on/off switch, but apparently it also acts with the stem cells and causes them to migrate to the site of the injury,” Buttigieg said. “There might be a link where we can take someone who has had an injury for many, many years — like Rick Hansen or Christopher Reeve — and cause the stem cells that they do have in their bodies to regenerate and migrate to that site and then replace that lost tissue.”

Ultimately, his research goal is to help quadriplegics and paraplegics regain their ability to walk and run. But given the complicated system, he is tempering his expectations.

“Maybe I can improve their quality of life so someone who is wheelchair bound might not be able to run a marathon, but they’ll be mobile with a cane or a walker,” Buttigieg said. “Maybe a quadriplegic won’t be able to move, but they’ll be able to put their shirt on or take a drink by themselves with their own hand.”

Facebook
Twitter
Email
Mix
Digg
Previous articleExoskeletons bring people with spinal cord injuries back to their feet
Next articleHow To: Transfer from Floor to Chair