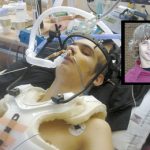 DURHAM — The family of an injured teen wrestler, now confined to a wheelchair, is seeking $65 million in damages.

The statement of claim filed by the Box family alleges negligence on behalf of the defendants. The claims have not been proven in court, but include allegations that Michael Box was moved after he sustained his injury during the wrestling match.

The defendants “failed to observe the cardinal rule of injury care being not to move an injured student . . .” says the statement of claim, filed in Whitby.

Michael, 16, is now quadriplegic after a wrestling match at Ajax High School in Pickering. Michael and his family are suing 16 defendants, including the Durham District School Board, Kawartha Pine Ridge District School Board and four sport associations for $65 million.

Michael sustained a spinal cord injury while competing in a high school wrestling match in December 2007. He was admitted to the Hospital for Sick Children in Toronto in early December until he was moved to Bloorview Kids Rehab in Toronto in January, where he stayed until about two months ago.

In addition to the spinal cord injury, the documents claim that Michael sustained a shoulder injury in a match earlier in the day. The statement alleges that Michael complained about the pain to two of the defendants but was not given sufficient medical care to address the injury. The day after Michael was admitted to the hospital he was still experiencing pain and was found to have a dislocated shoulder, the document said.

Among the claims are allegations that the defendants allowed the number of spectators in the gym to exceed capacity and tournament officials allowed matches to continue in the same gym where Michael lay having seizures and drifting in and out of consciousness, impeding paramedics from getting to the teen in an efficient manner.

The statement said the defendants failed to ensure that athletes wrestled with a partner of similar weight and strength and failed to provide a suitable level of competition and matching according to the skill, size, age and conditioning of the athlete.

The Durham School Board, its staff, employees, agents, servants and volunteers failed to ensure that coaching qualifications for high-risk sports were adhered to, the statement alleges.

Kenneth Crompton, the lawyer representing several parties named in the lawsuit, including both school boards, declined to comment on the case because it is in litigation. The clients he represents have yet to file a statement of defence because of “issues outstanding,” Mr. Crompton said.