Exoskeletons bring people with spinal cord injuries back to their feet 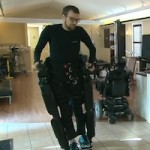 The London, Ont., man, who had his spine severed eight years ago when he was hit by a drunk driver, stands upright and then takes a few steps forward.

What’s helping him move is a wearable robot called an exoskeleton. Brogan is tightly strapped into the device, and with a joystick, he controls where he wants to go.

Exoskeletons are the future for people with mobility issues, many experts believe, and will give people confined to wheelchairs their best chance at walking again. And Brogan is so convinced of the technology’s potential, he is opening up a clinic entirely devoted to helping people use the device.

The exoskeleton is, in its simplest description, a mechanical body suit that is strapped to a person’s lower half. Originally developed for military use, a person controls an exoskeleton’s mechanical legs by an external control or by adjusting their weight forward. There are about half a dozen exoskeleton systems being developed around the world.

The type of exoskeleton Brogan is using is called REX, developed by engineers at a New Zealand company. According to the company’s website, REX has 29 on-board computer processors and its newest models can walk up steps or down slopes.

“Here I am, standing tall and independent,” Brogan said, after he strapped on REX, the first spinal cord patient in Canada to have one. “It’s nice to have a conversation with someone eye to eye.”

Brogan moves forward in the mechanical body suit by using a joystick placed near his head.

Exoskeletons like REX, though, are by no means fast, and certainly don’t move at the same speed as someone with functioning legs does. But not only does REX actually get people up and moving, the bionic units allow people to put weight on their legs and feet, which ideally will help improve bone strength, muscle tone and circulation.

Brogan believes so much in the potential of exoskeletons he is now opening up the first North American clinic offering bionic rehabilitation.

He plans to work with patients like Thyme Thompson, a 23-year-old woman who was paralyzed five years ago in an accident. Thompson is training with a machine called an Ekso, a slightly smaller exoskeleton than REX.

Instead of using a joystick, Thompson controls Ekso by shifting her bodyweight to activate sensors in the device which initiate steps. Battery-powered motors drive the legs.

“At the very beginning I felt like I was just up in gravity — you’re just a floating half body,” Thompson said. “But overtime it has progressed, and you try to remember what it felt like, and you sort of go over those old memories, those old sensations.”

More than 85,000 Canadians are paralyzed due to spinal cord injuries. And while exoskeletons are now primarily being used as rehab tools, physiotherapist Sari Shatil, who’s partnering with Brogan at the clinic, says she thinks people will be soon be using exoskeletons on a day-to-day basis.

“I think in five years we will see people who have otherwise been wheel chair bound, walking in their communities in their exoskeletons,” she said. “Being able to be at eye level with their peers, not wheelchair bound.”

A number of rehabilitation facilities in Canada are either testing or looking at purchasing exoskeletons for people to exercise their limbs.

With a report from CTV’s Medical Specialist Avis Favaro