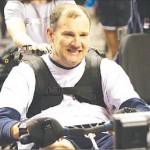 PEPPERELL — Brian Beek is not a competitive person. Never has been, he says. Not even back when he was able-bodied.

However, the 46-year-old father of two has tackled considerable physical challenges since being paralyzed from the chest down in an all-terrain vehicle accident in June 2008.

The activities to which he has applied his unhindered energies are therapeutic for Beek, not Lombardian. Still, winning is a nice thing.

And on Feb. 16 at Boston University’s Agganis Arena, Beek, a Pepperell resident who grew up on Lowell’s Christian Hill, won the FES men’s division of the World Indoor Rowing Championship C.R.A.S.H.-B Sprints.

More than 2,500 rowers, ages 12 to 96 and representing 25 countries, participated in the 33rd annual mid-winter whirring of the erg machines. The FES (functional electrical stimulation) division won by Beek included participants in a one-year study at Spaulding Rehabilitation Hospital in Boston that evaluated rowing’s effects on increasing bone density in those with spinal cord injuries. Half the participants were infused with drugs used in the treatment of osteoporosis, half weren’t. Beek was in the half that wasn’t.

Beek says his bone density increased by three percent and he lost 35 pounds. The 6-foot-1 Beek’s weight, 204 pounds, is back to what it was at the time of his accident.

And he has a world championship gold medal to his credit. While the FES stimulated nerves in his paralyzed legs, firing his quadriceps and hamstrings, Beek used his functioning arms to row 1,000 meters in 5 minutes, 33.8 seconds. The runner-up was nearly three seconds behind.

“Where there’s a will, there’s a way with Brian,” Mary-Jo Beek writes in an e-mail about her “nothing-holds-him-down son.”

“Unfortunately,” Beek says, he has not gained much movement since the ATV accident nearly six years ago in Pittsburg, N.H. stretched his spinal cord and fractured seven vertebrae, including one in his neck. Because he has limited hand function, he is considered quadriplegic, Beek says.

“What I have done (since the accident),” Beek says, “is gotten stronger.”

Despite Beek having no trunk control, his rowing has strengthened his core to where he can pick things off the floor from his wheelchair.

These results have inspired Beek to advocate for healthy lifestyles “for people in my situation,” while he lobbies local gyms and health clubs to invest in equipment adaptive to such people’s needs.

Though no longer part of a study at Spaulding, Beek still rows on equipment there twice a week. (He does drive, a modified minivan with hand controls). “I could buy one of the (rowing) machines and do it at home,” he says, “but I would miss the camaraderie.”

He also works as a volunteer at Spaulding, counseling the newly injured, who more closely connect with someone in their situation, says Beek.

He has remained active. Beek accompanied a Wounded Warriors surfing event to ride the waves last summer at Hampton Beach. He rides a handcycle along bike paths in Pepperell and Nashua with his wife Celeste and their son Spencer, 14, daughter Cassidy, 9.

But rowing provides his intense cardio workout. It is important for a person in his condition to remain fit, with sturdy bones, “to be ready” for the day stem-cell research produces a cure, says Beek. He is optimistic.

Beek, a licensed electrician, felt that sense of walking again when involved in another study at Spaulding in which he was strapped into an exoskeleton suit. The suit powered him as he was tethered to a Hoyer lift.

“It was surreal,” says Beek. “Being 6-1, it felt great to be back standing upright and being able to look down at people.”

Paralyzed People Control the Robot Waiters at a Japanese Cafe

Stem cell compromise better than nothing