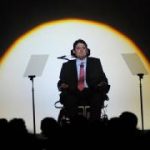 MIAMI — Kevin Everett and Marc Buoniconti each suffered a severe spinal cord injury while making a tackle. The difference between them on Friday was the result of more than 20 years of research.

Buoniconti has used a wheelchair since being paralyzed while playing football for The Citadel in 1985.

Everett walked through the lobby of The Miami Project to Cure Paralysis just about seven months after he crumpled face-down on the turf following a tackle in which his helmet struck another player’s helmet and shoulder pad.

“You can see it works,” Everett said. “They practically saved my life. They got me to where I wanted to be again, moving and walking around.

“He stood tall next to Buoniconti, Dr. Barth Green, the Miami Project’s co-founder, and Dr. Dalton Dietrich, its scientific director. Green started the project in 1985 with three families whose loved ones had suffered spinal cord injuries, including Buoniconti, son of pro football Hall of Fame linebacker Nick Buoniconti.

“To be able to see the work of the Miami Project pay off by being part of Kevin’s recovery, it means the world to us,” Buoniconti said. “To see how far the research has come, it goes to show you how close we are to actually finding a cure.

“Everett has made incredible progress, though his Rehabilitation continues.

“I’m still working on the dexterity in my hands, being able to do everyday stuff such as brush my hair, tie my shoes,” he said. “It’s getting better.

“Doctors initially feared Everett would never walk after he collapsed on the Bills’ home turf Sept. 9. He remained motionless for several minutes while medical personnel tried to figure out what was wrong.

Everett was paralyzed from the neck down when he arrived at a Buffalo hospital, and spent the first few days on life support. He would need four hours of surgery to realign his neck and stabilize it with screws, rods and a titanium plate.

But what helped save his mobility happened just minutes after he went down. Bills doctor Andrew Cappuccino placed Everett into moderate Hypothermia as he was carted to an ambulance. Cappuccino learned the experimental method to limit swelling and inflammation at a Miami Project seminar.

The therapy is analogous to an ice pack for the spine.

A few days later, Everett showed movement in his legs and arms and was sensitive to touch. He improved so steadily during the first two weeks that he was transferred to Houston for the next stage of his rehab.

Cappuccino continued consulting with Green on Everett’s status until the player was transferred to Houston.

Coincidentally, Bills owner Ralph Wilson had been among Green’s other surgical patients. In 1997, Green operated to relieve a narrowing around the spine that was pinching off the nerves to Wilson’s feet.

Everett said he was establishing a foundation to contribute to the research at the Miami Project, starting with a fashion show fundraiser Saturday in Miami Beach. The program is based at the Miller School of Medicine at the University of Miami, Everett’s alma mater.

“We’re hoping that Kevin and his foundation will spread the word: More research needs to be done, patients deserve better treatment,” Green said.

The Miami Project also has received a $113,000 grant from the NFL to continue its research into hypothermic therapy.

South Florida paramedics are currently being trained to administer the moderate hypothermia therapy Everett received to people who suffer heart attacks and traumatic brain and spinal injuries, said Green, chairman of Miller’s neurological surgery department at the University of Miami school of medicine.

“Dr. Cappuccino showed us it was feasible,” Green said.

Copyright 2008 by The Associated Press. All rights reserved.