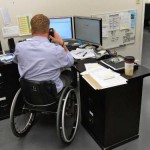 On July 27, 1993, 19-year-old Paul Farthing was playing with his Great Dane pup near his backyard pool.

“I had just shaved my head and was preparing to go back to The Citadel. I was selected for the Training Cadre,” said Farthing, now 39.

He was playfully taunting the pup to get her to chase him toward the pool, and then he’d jump in. The puppy wasn’t ready for water sports, so she didn’t follow. During one of his jumps, Farthing found himself at the shallow end of the pool.

He realized this as he hit the water and tried to tuck his head under and roll, but it was too late. His head struck the solid bottom of the pool. The impact broke his fifth cervical vertebra and left him almost completely paralyzed from the chest down. Fortunately, a couple of friends were present and when one of them realized Farthing had been under water too long, he went in after him.

After undergoing a cervical fusion procedure at Memorial University Medical Center, Farthing transferred to the famed Shepherd Center in Atlanta where he received expert therapy and treatment for his spinal cord injury. He returned to Savannah and, while continuing outpatient therapy, earned a degree in psychology at Armstrong Atlantic State University.

“I finished my education just a handful of months later than I was supposed to,” said Farthing. “When you throw a spinal cord injury into the mix, I was pretty proud of that.”

Farthing said some of his paralysis came from spinal cord shock, something that can eventually subside.

“Your injury is what your injury is,” he said. “I don’t want anybody to think, ‘Well, Paul worked harder and that’s why he can now walk a little bit and got back much of his function.’ No, absolutely not.”

“I was just a little bit more fortunate with my injury, as traumatic as it was.” Rather than the usual power wheelchair used by most quadriplegics, Farthing has recovered enough mobility to make do with a manual wheelchair he powers with his arms.

Fresh out of college, Farthing went to work for a man he had met in his spinal cord injury support group. He spent about four years selling urological supplies such as catheters; things that people with paralysis require in their daily lives.

“I did a pretty good job to where the manufacturer of the product we used to distribute contacted me and asked me to do it just for them,” said Farthing.

He went to work as a manufacturer’s representative for the next seven years. Farthing said the nature of his job changed as the company experienced rapid growth.

He said the job paid well but left him void of the satisfaction that comes from sharing expertise about a product — expertise gained from an otherwise tragic personal experience.

“My wife, Jessica, encouraged me to start my own thing and so, almost eight years ago, that’s exactly what I did,” he said. “I can focus on taking care of people again.”

Farthing says his business, Southeast Medical, is thriving and earning 98 percent of its revenue through the sales of catheters to a nationwide customer base.

Jessica helped launch the company, but, eventually, it made more sense for her to run their home while he ran the company, Farthing said.

She is still involved in the life of Southeast Medical, particularly on the strategic and marketing end, which is work that can be accomplished on a more flexible schedule.

Today, Southeast Medical has grown to 15 employees in three states, with customers in 22 states and growing.

“The vast majority of the people we serve have had a spinal cord injury like me, or they are a mom and dad with a child who has a birth defect,” said Farthing. “If I can make this process seamless for them, then they can focus on what their lives are truly about.”

Some of his sales reps are also people with spinal cord injuries.

“If we can let them learn from our experience and let them know that we are committed to providing the highest quality product at little or no cost to them, then that’s something they can count on and they can focus on living life,” he said. “We ship supplies to just under a thousand people every month. They can count on that and focus on what’s more important.”

Dr. Alan Lord is a surgeon in Savannah and a close friend of Farthing’s.

“Despite his debilitating disadvantage, those of us who know Paul find him to be one of the most dynamic, active and inspiring people we know.”

Farthings and his wife are the proud parents of three children: a 19-year-old daughter and two sons, ages 13 and 11. The boys go to St. Andrew’s School where Farthing coaches baseball and basketball and serves on the school’s board of directors. He said he and Lord, serving as volunteer coaches, pioneered a joint effort to make sure St. Andrew’s had a fifth- and sixth-grade baseball team.

“He is motivating to the kids and their parents,” said Lord. “Watching him roll his wheelchair out to the pitcher’s mound to reassure a rattled 12-year-old pitcher is one of the most inspiring things I have ever witnessed in sports.”

Lord said Farthing makes certain every child gets to play in every game, no matter the score or the outcome.

“As a 55-year-old surgeon, I have truly been exposed to some of the most accomplished and amazing people on the planet,” said Lord. “Paul Farthing is near the top of the list. He is truly a hero among us.”

Bringing The Promise Of Stem Cell Research A Step Closer To...